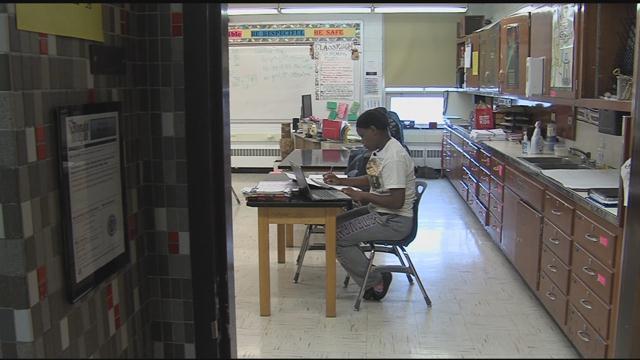 R'Reona Mills hopes for the day she can play outside with her sister, without fear of being shot.

The 13-year-old has lost five friends to gun violence.

\"It changes a lot of things in your life,\" she said. \"You're more careful. It breaks you down mentally.\"

During school hours at Lincoln Center of the Arts, Mills puts the breakdown to the side to focus on her studies. But she admits, it's hard to do.

\"You know, when you're so close to somebody and then they end up getting killed and that they're the same age as you and that could've been you,\" she said.

It's a sad reality facing many students going to back to school after a violent summer. But when the police lights and crime scenes enter the classroom, teachers are prepared.

Milwaukee Teachers' Education Association president Kim Schroeder said, \"there's a devotion and a caring for the students where you're on the front lines, you're a first responder in a certain way.\"

Schroeder said the union and district provides trauma training, so educators know what to say to students and when to listen when a tragedy arrives.

\"It's not just schools who can deal with it,\" said Schroeder, \"It's everybody and we all have to work together.\"

\"At our school, our teachers are like family,\" Mills said. \"We can go and talk to them about anything, at any time.\"

Mills is part of a young activist group, called Girls in Action, whose members pledge not to commit violence, but speak out against it. And if the community can believe that, she's confident things will change for the better.

\"Everybody has a future and it's up to you to make out what your future's going to be.\" she said.

According to MPS Superintendent Dr. Darienne Driver, the district lost 23 students last year, 13 were due to gun violence.