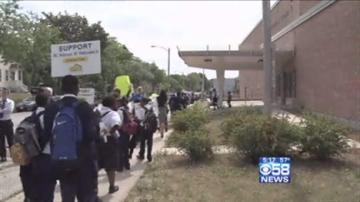 MILWAUKEE -- The MPS Board of Directors called a meeting Monday night to take a vote on a vacant building that has become the subject of a tug of war.

The board voted in favor of selling the former Malcolm X School on North 1st Street to a holding company.

There are tentative plans to turn it into a community center.

The sale requires the approval of the Milwaukee Common Council.

Saint Marcus wanted to buy the building and even had students march outside the location in its bid to buy the property so the private school could have a second campus.

But the vote is the first step in killing any chance at a private school opening up here.

\"This is about our kids and yet we're not willing to look at all of the options in an open and fair way,\" Tyson told CBS 58 News after the vote, \"We think that's profoundly problematic.\"

Denise Callaway of MPS said, \"For us, the important thing is this building has a purpose that the entire community will now be able to share and participate in.\"

A republican bill is working its way through Madison that would force the school district to sell unused or under utilized buildings.

MPS says it offered St. Marcus other locations, but it refused.