MPD officers save dog from lagoon 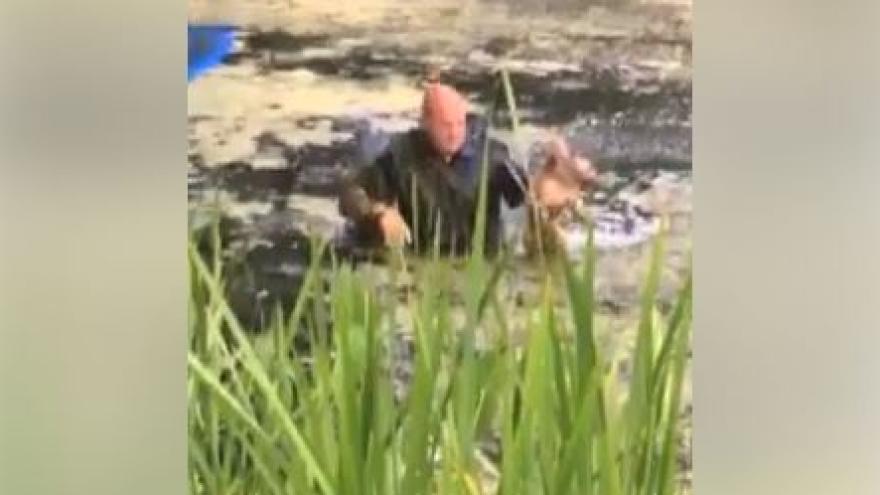 Milwaukee Police Officers Joe Spingola and Mike Smith were in McGovern Park on the city's north side around 6:00 PM Wednesday evening, talking with some kids who were fishing in the lagoon. That’s when they heard a splash and saw that a small dog had fallen into the lagoon.

Officers Spingola and Smith ran over to it and Officer Spingola managed to reach in and pull the dog out of the water. As soon as the dog’s feet hit the ground, it ran off towards the tot lot where several families were playing.

Minutes later, there was another splash. The dog jumped back into the water. This time it swam straight out to the middle of the lagoon.

The police snare was too short to reach the dog and a county parks employee had a net, but it too was too short. The owners were nowhere to be found so Officer Smith radioed for a Milwaukee Fire Department boat.

While waiting for the boat, they were trying to coax the dog back to shore. After a few minutes the officers could see the animal was starting to struggle in the thick weeds and muck so Officer Spingola decided to go in after the dog.

As Officer Spingola was swimming towards the dog, the dog was struggling to keep afloat. When he reached him, the dog was wrapped up in the weeds, tangled in fishing line and had a hook and bobber hanging from him.

The Officer estimated that the water depth was over 7 feet in the area requiring him to swim.

The dog was taken to the Milwaukee Area Domestic Animal Control Commission to be checked out. It appears to be a happy and healthy 8-year-old brown poodle mix.