Mount Pleasant Officials Searching for a Solution to Erosion Concerns 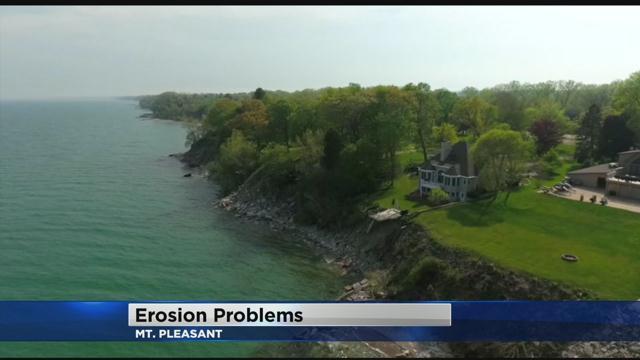 The search is on for creative and constructive ways to stop the erosion on bluffs overlooking Lake Michigan in Racine County.

Homes may have to evacuated if the erosion problem doesn’t getting fixed quickly.

Mount Pleasant Village President Jerry Garski tells me he is feeling the pressure to give some good news to homeowners who fear having to leave.

Up until this morning officials here in Mount Pleasant were hoping to use leftover concentrate from the zoo interchange project. The DOT now says that plan won't work.

The next solution is working with Waukegan airport. The airport is replacing roadways there and the idea is to use that heavy duty material from the runways along the lake here in Mount Pleasant.

They would place it at the toe of the bank right where the water hits in order to break the wave action so the bank doesn't erode more.

Jerry Garski says as he looks for solutions, he is feeling the pressure -- but he is getting help from the community.

Garski also said he got a letter from Paul Ryan's office which says the federal government is trying to see if they have any funds they can put towards this project.

The estimated cost of it all is about $10 million.