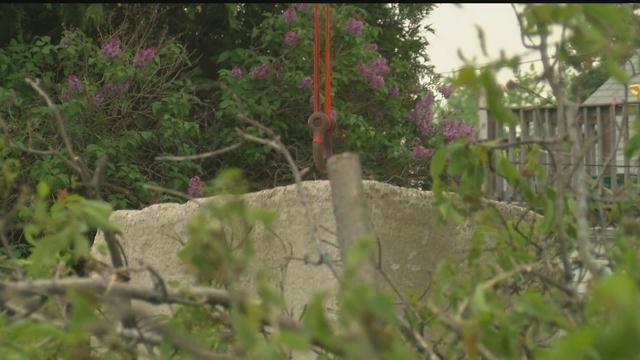 The first homeowner in Mount Pleasant has taken on this problem himself.

After he saw his property disappearing, and no government help on the way, he hired a crane and construction crew to stop it at least for now.

The crane stretches more than 100 feet in the air.

The cement blocks weigh over 3-thousand pounds, and they are still no match for Lake Michigan's waves.

A Mount Pleasant homeowner is trying to save his home from Lake Michigan.

CBS 58 spoke to the homeowner today off camera

He said he had to put his home remodeling project on hold devoting the funds to saving his property.

Depending on how rocky the water gets, this temporary fix could last weeks or months.

Village President Jerry Garski is offering the support he can.

But he hopes the government will bring help soon

The village was hoping to meet with the army corps of engineers by today, but they have not got word from them yet.

The village president expects they will be able to build a permanent stone breaker wall, to keep the harsh waves away from homeowner's property