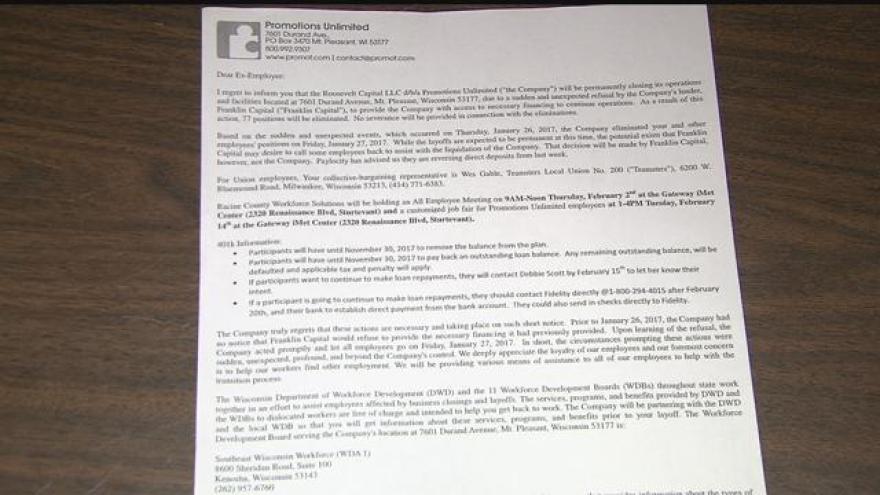 CBS 58—A Mount Pleasant Company shut its doors Friday, leaving about 70 people without jobs and now the business is trying to take back money.

Last week employees at Promotions Unlimited were called in to the cafeteria, told they no longer have jobs, won't be paid for last week's work, and now the company is trying to take even more paychecks from them.

“It's unbelievable,” said now former employee Michelle Humburg. “We were all hard-working, honest and very dedicated employees and this is how they treat us at the end?”

Humburg worked at Promotions Unlimited for 14 years, until Friday, when she and all her coworkers learned they no longer had jobs.

“We expected a little more respect than what we got,” said Karen Puder, who worked for the company for 11 years. “When they just said you gotta go, get your stuff and go. That's it.”

The company president sent out a letter February 1, addressed to "ex-employees" stating  …the circumstances prompting these actions were sudden, unexpected, profound, and beyond the Company's control."

There will be no severance packages and insurance is canceled.

“I'm scared because I have bills to pay,” Puder said. “I have prescriptions to get. So now what do you do?”

And another shock: in the letter, the company says its taking back the final paychecks, which were directly deposited in workers accounts last week.

Employees frantically called their banks Thursday, wondering if it was even legal. Humburg and Puder managed to keep their checks.

“They did take my money this morning but luckily I had closed those accounts and created new ones,” Puder said.

The only bright side right now these women say is that former co-workers are sticking together.

“Thank god we had the employees that we did because they're a great team,” Humburg said.

CBS 58 was unable to reach the company’s owners for comment.