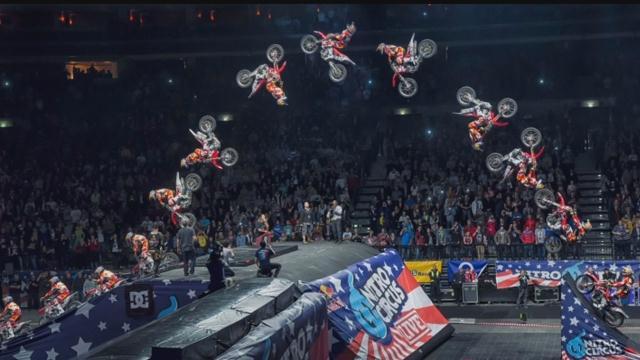 Josh Sheehan was a special guest on the CBS 58 News at 4 p.m.

The native of  Donnybrook,  Australia is the star of the Nitro Circus which will be playing the BMO Harris Bradley Center on October 22nd.

Sheehan always loved high action, adrenaline-pumping sports and watched all the early Motocross movies. He learned to ride a motorbike and drive a car early on the farm, and he started using his brother’s Motocross bike to find jumps. At the age of 14, he worked on the farm over school holidays so he could buy his first bike, a KDX200. Then, he started riding trails, tracks and building jumps and berms in the bush on his dad’s property.

When he was 17, he upgraded to a CR250 and entered his first race. He fell in love with the thrill and started racing more and more while playing with ramps on the weekends with friends. By the age of 20, he had worked his way up to A-grade in the Western Australia state titles on a KX450. In 2006, he learned to flip a 50cc bike with a friend. This fuelled the fire, and soon after, he learned to flip his KX450 motorbike in a sand quarry near his house. This motivated him to learn more tricks and enter his first competition early in 2007, the WA FMX State championships. All was going well until he crashed on a massive whip, breaking his wrist.

With the Narrogin Revheads FMX competition coming up at the end of 2007, Josh started learning even more tricks to give this competition a serious try. He placed 3rd in that competition, which was the turning point in his career. He then turned his focus from racing to freestyle and picked up a ride with the Factory Honda Race Team in 2008. From then on, he has been learning tricks and gaining skill to take on the rest of the world.

Josh Sheehan, the only man in the world consistently performing the motorcycle double backflip today, was determined to make history by landing a triple backflip.

He landed the world's first triple backflip on a motorcycle on April 28, 2015 at Pastranaland.

For more information on the Nitro Circus click here