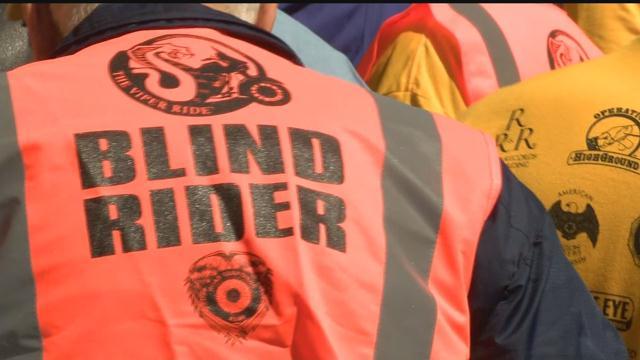 What separated this ride from others in the state is that veterans who are blind or visually impaired are matched with volunteers trained to take them out of the roads.

The inaugural "Viper Ride" left Milwaukee with 48 visually impaired veterans, arrived in East Troy for a lunchtime pit stop, and came back to Milwaukee in the late afternoon.

The total distance of the trip was about 110 miles. To an avid biker that might not seem like that big of a deal - but to this group it wasn't as much about the views as it is about the feeling.

Those senses experienced this: the sound of a revving engine, the smell of exhaust, and the feel of a helmet on your head...87-year-old Herb Kent's head in this case.

He's from Manitowoc, he's a Korean War veteran, and he also happens to have macular degeneration.

"The center of my eye is gone. I've got side vision," Kent said. "It's probably 20 years since I drove a motorcycle."

He was among company at East Troy's Village Hall where 47 other veterans with vision issues also work with their "pilots".

"Pilot" is the term used for motorcycle drivers. The veterans are referred to a "tailgunners" hinting at their position on the bike.

"Well Herb's a family man and he's told me about his Marine Corps service. And he used to run bikes himself so it's a great way to get him back on the road," Giesen said.

But even through every riders can't see the giant flag above their welcome organizers say going 'all out' is a part of their mission: connecting visually impaired veterans...

...people forced to be vulnerable after holding highly physical positions.

"So at one point of time in their life they were almost like supermen, right?" T.J. Oman, the ride organizer, said.

"It's very difficult," Kent said. "I drove semi for 38 years and now I can't drive nothing."

But it's hard to be shy on a bike.

"I do ride two-up a lot but not very often with people I don't know. But Herb's been a great rider. He leans when you're supposed to. He's fantastic," Giesen said.

And one extra note about the ride's name: VIPER. It's not just a cool mascot - it actually stands for 'visually impaired patriots experiencing the road'.

Organizers are already planning their second annual ride for next summer.