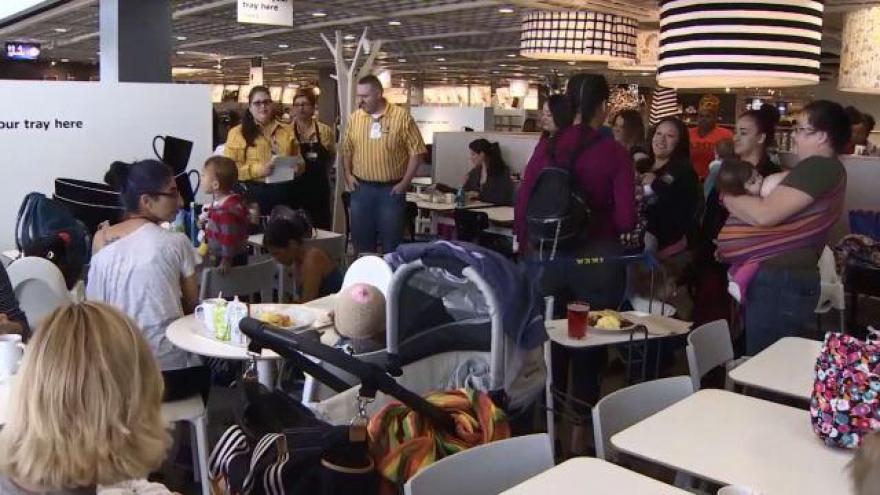 SUNRISE (CBSMiami) – Mother’s in Sunrise participated in a “nurse-in” after one mother felt singled out while breastfeeding her daughter at an IKEA.

Amanda McLaughlin said that while she was feeding her five-month-old daughter in IKEA, an announcement came over the P.A. system reminding customers of a private room where nursing mothers could go.

“It just so happened as I started I heard a recorded message And I was like what just happened?” said McLaughlin.

The recorded message said “Did you know IKEA has a baby care room located in the lobby on the first floor? There is a changing table with a comfortable sitting area,  a perfect place for that feeding.”

“I thought it was directed at me,” she said.

Outraged, McLaughlin spoke to the manager who told her the recording plays periodically throughout the day.

IKEA says that they support mothers’ rights to breastfeed openly and is a family friendly company which strives to provide a comfortable environment for all its customers.

When McLaughlin posted her experience on Facebook, the message went viral.

Instead, IKEA offered them a free breakfast and a chance to clear up any misunderstanding.

“We don’t press a button on a message or monitor people,” explained Claudia Lascano, a marketing manager for IKEA.

Lascano says all IKEA stores have a policy of allowing women to breastfeed any spot they feel comfortable.  The recorded message is on a loop and there is no set time it airs, she says.

They offer a family restroom with a chair and changing table for women who want an alternative to breastfeeding in public.

The women who attended the breakfast say it was a chance to open a dialogue on breastfeeding in public.

Some say they still endure breastfeeding backlash, being told to cover up or leave.

And many feel IKEAs family restroom with a chair and changing table isn’t enough.

“You don’t want to feed your baby next to a diaper changing area,” said new mom Sharlotte Hidalgo.

“Time is gonna fix it,” added Adina Pelicci. “Getting an actual nursing room, that would be progressive.”

About 50 mothers participated in the “Nurse-In.”