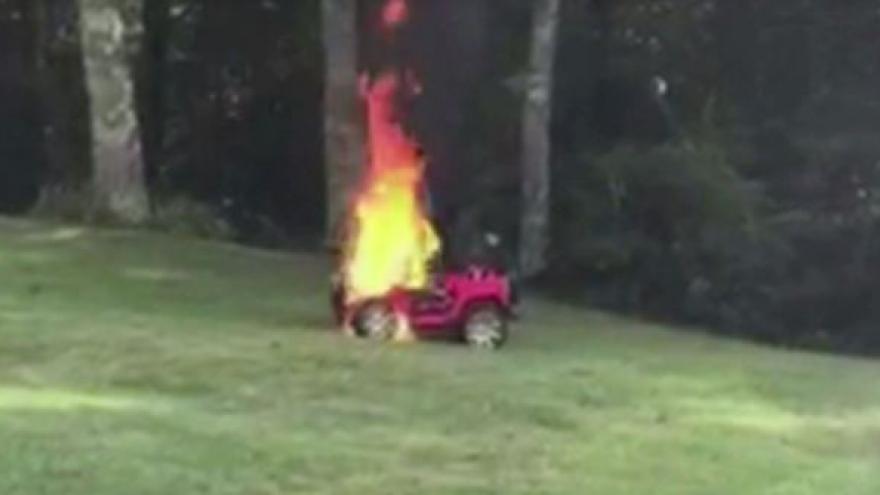 "I think that was the really scary thing because they were buckled in and they are both little so neither of them could have gotten themselves out," Michelle Kline told CBS Boston.

Fortunately, Kline was feet away as her kids started driving up the small hill in her neighbor's North Andover yard.

"It was just kind of that hot electrical smell and saw some smoke coming out of the little hood," she said.

She rushed over and got her 16-month-old and 3-year-old out of the vehicle. Kline said within two minutes the toy was charred and all that was left was a small bucket of charred plastic and metal.

The family recently bought the $500 'SPORTrax Awesome XL' model as a birthday present for their children. Kline said the manufacturer wouldn't talk with them, but did talk with the fire inspector. "They did say to the fire inspector, that they did put a lot of fail-safes into the car to protect people from this happening, which is again is part of the reason we did purchase this car," Kline said.

North Andover Fire Chief Bill McCarthy said it appears the fire started where the batteries are, but it's hard to tell because there's not much left. Concerned about this happening to other children, the department notified the Consumer Product Safety Commission, fire marshal, distributor and manufacturer.

"Just to see if this is an isolated incident with this one particular vehicle or is at potential issue that it's happened somewhere else," said McCarthy.

The Kline kids are OK.

"Last night when he was going to bed he said goodbye to his jeep on the front lawn," Kline said of one of her children.

They are now relegated to playing with the old school pedal bike. The manufacturer did not return a request to comment.