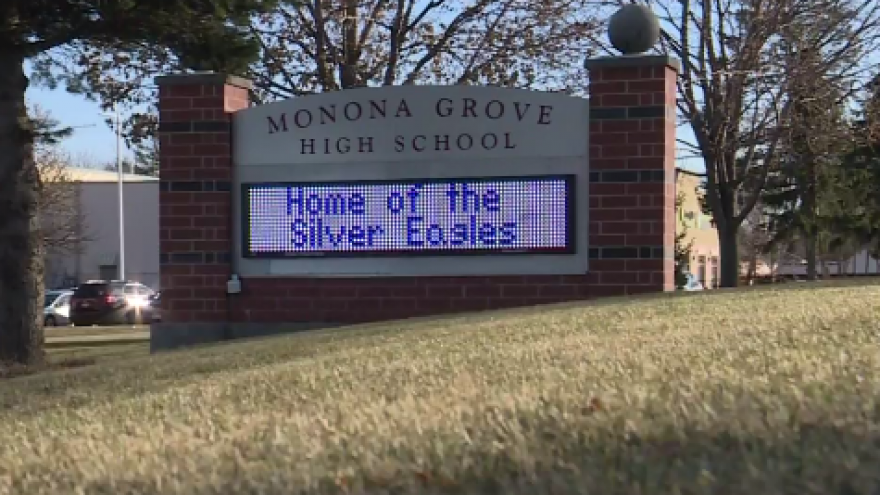 MONONA, Wis. - (WISC) A mother is asking the Monona Grove School District to award her son a varsity football letter she says he deserves.

“He is a good coach, and he took a chance on Max,” Zimprich said. “(He) and Max had a great relationship, and it had been a great season up until that point.”

According to a letter Associate Principal Kristen Langer sent Zimprich and Zimprich shared with News 3, the coach asked Max to join the team for one last breakdown, and “Max responded in a threatening way ‘f*** you! You don’t talk to me. I don’t have to listen to you’ along with other explicit mumblings.”

“I would definitely take it back,” Max said. “I didn’t mean to hurt his feelings or anything. I was just really upset at the time and just couldn’t hold myself together.”

“While I won’t disagree that his words and the exchanges were not the most appropriate between a coach and an athlete, I don’t think, given the totality of this situation and the entire season, that that’s a very accurate description,” she said.

Zimprich said she and Max met with the principal and football coach on Nov. 10 to discuss the incident. She said Max described what happened and the coach agreed. After the exchange, the principal said Max would have to sever ties with football and could not attend the banquet.

“There was no discussion,” Zimprich said. “It was very obvious that the decision was made prior to us walking in.”

Max also received an athletic code violation, which the school said was his third. Zimprich said she believes it’s only Max’s second.

In the school letter sent to Zimprich, it said the third violation “results in one year of non-competition participation.”

“If he was a freshman or a sophomore or even a junior, you could rebound from that but being that he’s a senior this year, you can’t rebound from it,” Zimprich said. “So there’s no chance to go out for wrestling next year and get your varsity letter, that was taken away from you this year because you’re a senior.”

Aside from not receiving his athletic letter, Max said he was also upset that his mom wouldn't be able to go to the banquet either. Max said she was very dedicated to the team and spent time making locker signs and buying treats for the players and coaches.

Zimprich appealed the athletic code violation and at a meeting Nov. 30, she presented her side and the district presented its side to a panel of four teachers. Zimprich said the principal called her later that evening and told her the panel had upheld the decision.

“I was disappointed. I felt that my letter was very emotionally appealing, and it also covered a lot of the facts, but to be honest, it was somewhat expected,” Zimprich said.

Max said football has made him think about going to college and playing for a collegiate team. However, from his understanding, Max isn’t sure if he’ll be able to use high school footage to show college recruiters.

“My impression of what’s going on since I’m not part of the team, I don’t get my letter or anything, I’m not going to be able to use any of my film from games or practices to send to any recruiter or coach,” he said.

News 3 reached out to Monona Grove Athletic Director Jeff Schreiner for clarification but did not receive a response as of Thursday night.

Zimprich said this is about more than the athletic letter. It’s about the meaning behind it and how hard Max worked to earn it.

“I’m biased, but I can’t think of another player in that entire program that faced more adversity and grew more this entire year,” she said. “Five years from now, 10 years from now, Max will have that letter to show, like, this is what I got. I did it.”

Zimprich said she has a meeting scheduled with Superintendent Daniel Olson Friday morning to discuss the incident. She said she hopes to clarify misinformation in the school’s recorded description of the event, which currently says “Max responded again by challenging Coach Beckwith to a fight on the field while swearing at him.” Zimprich said she’s talked with the principal and they both agreed Max never tried to fight the coach.

Zimprich said she also hopes Max gets his athletic letter.

“He was always involved and he was there and one unfortunate circumstance at the end of the final game, after it was over, is now going to leave a sour taste,” she said.