"Most Valuable Calf?" Local doc weighs in on Rodgers injury 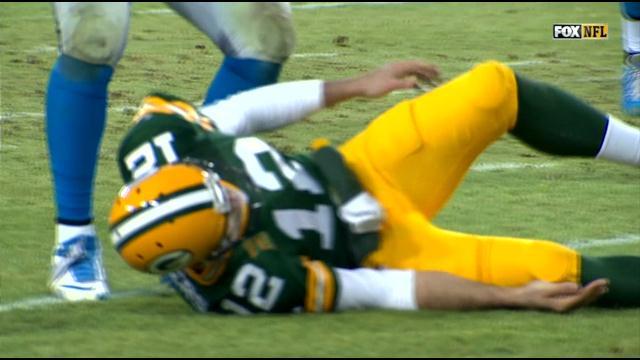 The potential MVP has a bad MVC, or "most valuable calf."

As Aaron Rodgers was carted to the locker room during the second quarter of Sunday's game against the Lions, Packers fans must have thought their chance at another Super Bowl was slipping away. While Rodgers made a gritty return to lead the team to a victory and a playoff bye, fans are wondering if his left calf will be in issue for a potential deep playoff run.

For answers, we went to Dr. Paul Miller, Sports Medicine Director for Aurora Health Care in Milwaukee.  He is not a Packers team doctor, so he doesn't have the access to Rodgers to make a specific diagnosis, but was able to make a few observations about his torn left calf muscle.

A torn muscle is usually categorized in grades from one to three. Since Rodgers was able to come back in the second half on Sunday, Dr. Miller thinks the quarterback has a mild, or Grade I tear.  "A mild tear can take one-to-three weeks to heal, a more severe tear even longer," Dr. Miller said.

Rodgers will get some time to rest.  Packers Head Coach Mike McCarthy said in his Monday news conference that the team won't practice until Friday, and that team doctors will focus on Rodgers' recovery. "We had some testing done, and we feel like we have a good plan for... his rehab this week," McCarthy said.

Dr. Miller said the team's rehab plan could include a number of different options. "You can elevate it, you can do ultrasound treatments, you can do compression wraps," he said, "but it has to have a certain amount of time to heal."

Will the bye week be enough time?  Miller calls the calf a "vulnerability" since there is always the danger that Rodgers could re-aggravate the injury.  But he has one word for Packers fans that should sound familiar: R-E-L-A-X. "Relax and don't worry, I think he'll be good to go," Miller said.
Share this article: