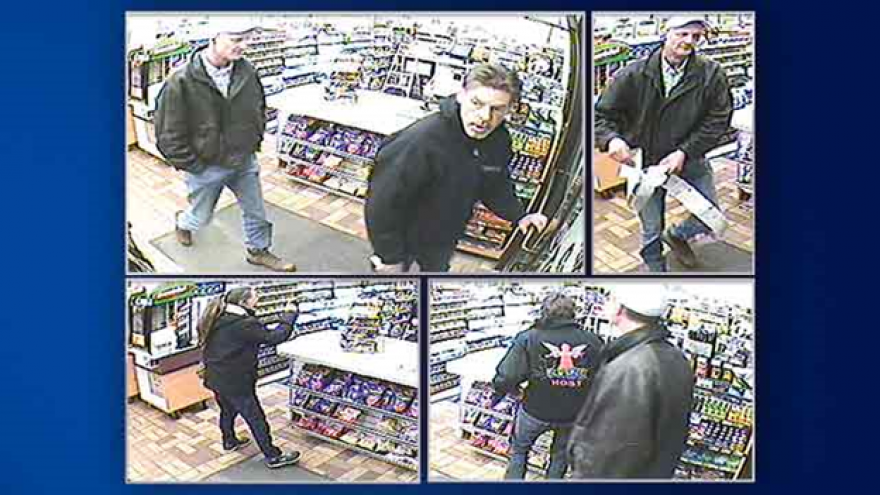 Two men and a woman are suspected in the theft of more than 100 lottery tickets from a Speedway gas station in Memonomonee Falls.   Memonmonee Falls Police have released surveillance photographs of the suspects.

The suspects are described as a white female between 50 and 60-years-old with brown hair pulled back into a pony tail.   She was wearing a black ¾ length jacket with hood, dark pants, brown purse and orange eyeglasses worn on her head.   The first male suspect is a white male between 50- and 60-years-old with brown hair and a mustache.  He was wearing a black hooded sweatshirt with an orange angel pattern the words HOST written on the back.   The second male suspect is  a white male, also 50- to 60-years old, wearing a white baseball hat, dark leather jacket, blue jeans and brown work boots.    The boots show signs of wear on the toe.

According to the Police, the woman entered the Speedway and began talking with the clerk at the rear of the store.   She created a further distraction by dropping and breaking a glass bottle.   The two male suspects then entered the store.   One of them  went behind the counter and removed 18 Crossword Craving WI Lottery scratch off tickets. The two male suspects left the store but one returned, went behind the counter and removed 95  Wild Bingo WI Lottery scratch off tickets before fleeing  the store. A short time later, the female suspect left the store without making a purchases.

The Menomonee Falls Police believe this theft may be related to a similar theft reported to have happened in the area recently.

If you have had similar incidents or can identify the suspects, please contact the Menomonee Falls Police Department at 262-532-8700 and refer to MFPD case 18-007274.