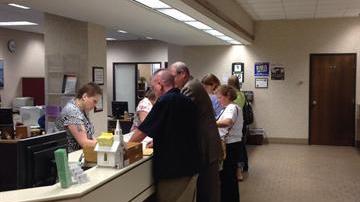 MILWAUKEE -- It's been a busy weekend at the Milwaukee County Courthouse.  Same-sex couples started coming in Friday for marriage licenses.  It stayed busy throughout the weekend as hundreds of couples did the same thing in Milwaukee County.

The county clerk's office opened at 8 am Monday.  There were three couples ready to fill out the paper work right at 8 - and they did so.  Rick Stabler and Dan Riedl were the first through on Monday.  They completed paperwork and then had their ceremony.

They've been together for 26 years.  They're not concerned about any other legal challenges.  Rick said they were blindsided by the decision Friday afternoon.  They were not together when they heard the news.  Both agreed it wouldn't change a lot - they've lived together for years, but it is a relief.

\"I don't know it validated us,\" Rick Stabler said.  \"It cleared up any legal challenge that might come up with us in the future. It just cemented our relationship basically.\"

\"We've been together 26 years so it's special,\" Dan Riedl said. \"We didn't think this would be possible in Wisconsin. We wanted to make sure we took care of the opportunity.\"

Dan and Rick said they had planned to get married this year - no matter what.  Initially they were going to go out of state, but this ruling allowed them to do it right at home.