More Kardashian controversy: from butts to the 'KKK' 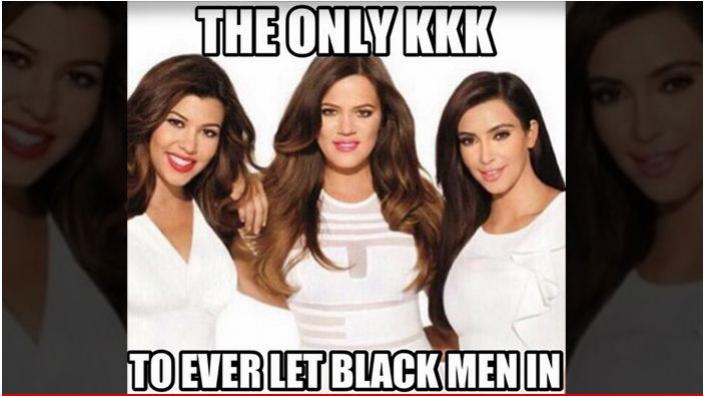 If there's attention to be had, you better believe the Kardashians know how to grab it.

On Tuesday night, Instagram was on fire thanks to two posts made by Kim and Khloe Kardashian. One of the images, posted by Khloe, made a joke about the Ku Klux Klan that has unleashed a wave of criticism.

And then, just a few hours after Khloe posted (and deleted) the inflammatory photo, Kim decided to unleash her naked, oiled butt onto the world.

The 34-year-old posed for the winter issue of Paper magazine, which has the express goal of \"breaking the Internet.\" (In that case, Paper can consider its mission accomplished.) The publication chose photographer Jean-Paul Goude to do the honors, asking the artist to recreate his \"Champagne Incident\" photograph.

The result is one cover in which Kim poses in a floor-length gown, balancing a glass of champagne on her rear, while the other cover puts the reality star's best known asset front and center in all its glistening glory.

\"And they say I didn't have a talent,\" Kardashian tweeted after sharing the photos. \"Try balancing a champagne glass on your a** LOL.\"

That doesn't sound easy, but we'd say the Kardashians also have a clear talent for provocation. Before Kim set out to #BreakTheInternet, her younger sister was on the verge of doing so as well.

Khloe, 30, posted a picture on Instagram of herself with her sisters Kim and Kourtney that was captioned: \"the only KKK to ever let black men in.\"

It isn't clear where the image originated, but Khloe shared that along with her own comment, calling the statement \"True.\" (Khloe was married to an African-American basketball player, Lamar Odom, and Kim has dated a number of famous African-American men, from singer Ray J to athlete Reggie Bush.)

The post has since been removed, but the controversy hasn't been erased as easily.

Khloe hasn't explicitly commented on the reaction, but some believe one of her recent Instagram posts is an attempt at an apology.