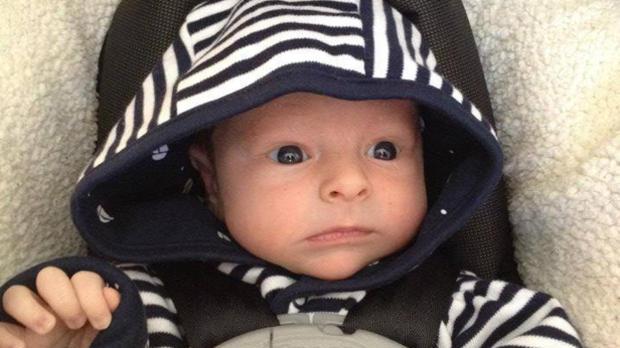 When Jennifer Hibben-White learned that she and her newborn son Griffin may have been exposed to measles, she didn't take it quietly. It made her angry -- \"angry as hell\" -- and she wanted everyone to know it.

The Toronto-area mom took to Facebook and her story quickly went viral; as of Thursday night, it's been shared more than 275,000 times. She posted a photo of Griffin and wrote:

This is my son Griffin, and he may have measles.

On February 9th, I received a phone call from York Region Public Health, informing me that Griffin, alongside my mother and I, was potentially exposed to the measles virus while attending a newborn weigh-in appointment at my doctor's office in Markham on January 27th.

Griffin was 15 days old at the time.

Babies like Griffin are especially vulnerable because they're too young to be vaccinated; children usually get their first measles-mumps-rubella (MMR) shot at the age of 12 to 15 months. Until then, they rely on so-called herd immunity -- the rest of the population getting vaccinated -- to protect them from the spread of disease.

The outbreak that started at Disneyland in December has largely spread among people who were not vaccinated, and that raises the risk for others. Hibben-White continues:

And I'm angry. Angry as hell.

I won't get angry at or blame the person in the waiting room. I would have likely done the same thing...you get sick, you go to the doctor. I have no idea what their story is and I will never know. But I do know one thing:

If you have chosen to not vaccinate yourself or your child, I blame you.

You have stood on the shoulders of our collective protection for too long. From that high height, we have given you the PRIVILEGE of our protection, for free. And in return, you gave me this week. A week from hell. Wherein I don't know if my BABY will develop something that has DEATH as a potential outcome.

The idea that Griffin might be at risk struck Hibben-White especially hard because she tragically lost a child before. The Toronto Star reports her 5-year-old daughter, Olivia, died in her sleep of a blood infection 3 years ago.

She alluded to her family's loss as she let loose on the claims some parents cite for opting out of the vaccine:

You think you are protecting your children from thimerosal? You aren't. It's not in their vaccine.

You think you are protecting them from autism? You aren't. There is no, none, nada, nothing in science that proves this. If you want to use google instead of science to \"prove me wrong\" then I am happy to call you an imbecile as well as misinformed.

You think you are protecting them through extracts and homeopathy and positive thoughts and Laws of Attraction and dancing by candlelight on a full moon? You aren't. I PROTECT YOUR CHILD. We protect your child. By being concerned world citizens who care about ourselves, our fellow man, and our most vulnerable. So we vaccinate ourselves and our children.

You think you are protecting them by letting them eat their shovel full of dirt and reducing antibiotics and eating organic? You aren't. As an unvaccinated person you are only protected by our good graces. WE LET YOU BE SO PRIVILEGED thanks to our willingness to vaccinate ourselves and our children.

You know what vaccines protect your children from? Pain. Suffering. Irreparable harm. Death.

And you would be the first to line up if you had an inkling of what the death of a child feels like. You would be crawling through the streets on your hands and knees, begging, BEGGING to get that vaccine into your precious babies because that is what I would have done, if I could, to save my daughter.

The fact is, there was no vaccine for her. Not for her illness. And she died. She died at age five and a half, and she is gone.

So far at least 7 cases of measles have been reported in the Toronto area. Measles causes a high fever and distinctive red rash. One in 20 patients develops pneumonia and a small number can suffer encephalitis, resulting in brain damage, deafness or even death.

Hibben-White was told to keep Griffin home in isolation for 21 days to see if he develops the illness. She still has 5 more days of waiting and worrying left to go.