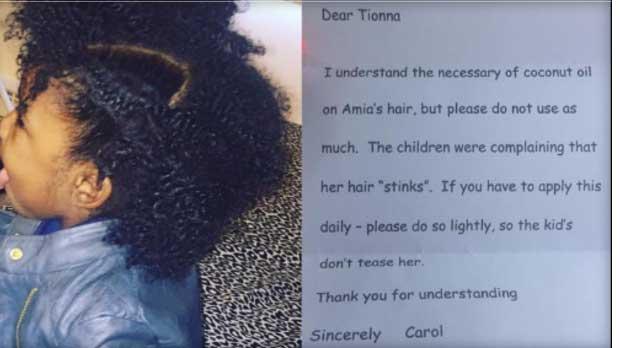 (CBS NEWS) This week, an African-American mother received a note from her young daughter’s teacher, complaining about the smell of the coconut oil used every day on her natural hair.

“I understand the necessary (sic) of coconut oil on Amia’s hair,” the note read, “but please do not use as much. The children were complaining that her hair ‘stinks.’ If you have to apply this daily – please do so lightly, so the kids don’t tease her.”

As you can probably imagine, the little girl’s mother, Tionna Norris, was none too pleased with the note.

The post quickly went viral, with thousands of people sharing Norris’ story and hundreds more voicing their outrage at what they perceived as the teacher’s audacity for addressing her critique to the victim, rather than the bullies, and for fundamentally misunderstanding black hair.

“Can’t wait to get to the school tomorrow. Like so the kids were bullying my child so you send ME a letter???? How does that make sense. She needs oil for her hair,” Norris commented in a later post. “She’s literally the only black child in her class this is why I make it a point to keep her hair natural and tell her yes she’s different and it’s magical.”

And the overwhelming majority of people on the now viral Facebook thread passionately concurred.

“Why is the ill manner of another child your responsibility? It’s absurd,” wrote one commenter. “I hope the teacher wrote the other kids parents about being bullies since she’s so damn concerned,” another agreed. “This teacher needs a teacher in manners, etiquette, and grammar,” wrote another.

Norris and her fiancé have since met with the school’s director over the incident. And according to further posts on Norris’ wall, they were informed that none of Amia’s fellow classmates ever actually complained about the smell of her hair. It was apparently a complaint originating from the teacher, whom Norris claims is now being disciplined.