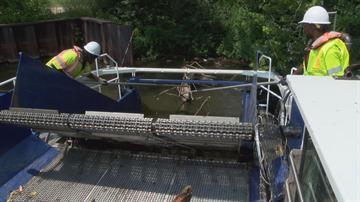 MILWAUKEE -- On a warm summer Tuesday under the Hoan bridge you could hear a common complaint.

\"It's really green and there's a bunch of garbage down there,\" passerby Sheng Xiong said.

Floating plastic bags, bottles and cigarette lighters litter the water where the Milwaukee,  Kinnickinnick and Menomonee Rivers flow into Lake Michigan -- not the sight Xiong hoped to see.

\"I never let him litter,\" Xiong said of her boyfriend.  \"I always tell him to pick up his trash, so yeah, it definitely bothers me.\"

Milwaukee native Jimmy V has fished the area for 15 years.  He thinks the water has  improved lately, but not as much as he'd like.

\"Garbage has been trapped finally getting released,\" the fisherman said.  \"Maybe need to get some workers out here to  pick that garbage up.\"

Ask, and ye shall receive.

\"It never ceases to amaze me the things I find in this river,\" Captain Scott Cassavant said.

\"You can actually see into the water a little bit [today],\" Cassavant said.  \"On other days, it's opaque, color of coffee.   You cannot see into it at all.\"

His crew collects waste and natural debris, loading the deck with enough to fill a twenty-yard-long  dumpster every day.

\"Rubber and plastic, toxins, things like that take much longer [to break down],\" Cassavant said.  \"We focus on that.\"

MMSD, the city and Port of Milwaukee chip in to pay for the Skimmer's [named 'Lynrd Skymmr'] $124,000 operating costs every year --  money Cassavant says is well spent, but he could use some help.

\"Pick up your trash, put it in a receptacle where it belongs,\" Cassavant said.  \"A little bit of planning goes a long  way.\"

A lot of the garbage gets picked up by the rivers as they flow into Milwaukee, sometimes from several counties away.  Cassavant says their cleanup record is filling five of those twenty-yard drumpsters in one day.