MLB Safety: Should nets be extended? 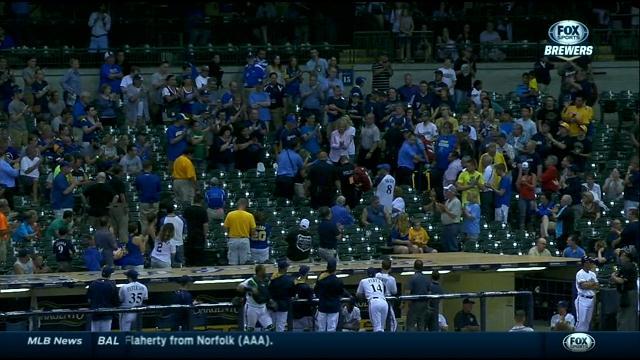 Monday night's Brewers vs Braves game was stopped for nine minutes after a woman in the stands was hit in the face by a foul ball.
We've seen this sort of incident several times this year in major league baseball parks and it's raised new questions about protection for the fans.

\"To me its simply amazing they haven't put up nets yet. I've seen little kids get hit in the face, every age, old and young. To me it's just a matter of time before someone gets killed,\" said Brewers player Jonathan Lucroy.

Jonathan Lucroy saw a woman get hit Monday night and he knows firsthand how dangerous it is.

\"Speaking from experience, I've been hit in the head, I have a scar right here to prove it. I was at the bat hitting, that was like 95 MPH; it wasn't 120 MPH,\" said Lucroy.

\"It doesn't happen all the time but when it does its never a good thing,\" said Gennett.

Which is why Lucroy thinks the nets need to extend beyond home plate.

\"For me, at least from the dugouts down you have to have nets,\" said Lucroy.

But more nets means less of a view, so is that a price fans are willing to pay?

\"No nets for me. I wanna catch a foul ball. You put up nets, I have no opportunity to,\" said Ashley Baldwin.

\"I'd be OK with it. Because sometimes the netting doesn't get into the view of the game and sometimes people just need to pay more attention to what's going on,\" said Melinda Smith.

\"No it takes away from the fun of the game. We're babying these people too much as it is,\" said Lavelle Smith.

There are those who think they could duck or catch the ball.

\"Maybe not fast enough to get it but I'd be good enough to knock it down so it doesn't hit her,\" said Klipstein.

But Lucroy says its just not that easy.

The woman injured in Monday's game is still recovering at Froedtert but is in satisfactory condition.

Here is a statement from the MLB: \"We are in the midst of thoroughly examining the issue of fan safety. When you have an issue like this, you have to re-evaluate where you are on all the safety issues. It is important not to lose sight of the fact that we have taken important steps in this area.  Bat safety is much improved from where it was a few years ago.  We’ve spent a lot of time, money and effort to make sure our bats are safer and we have less incidents.”