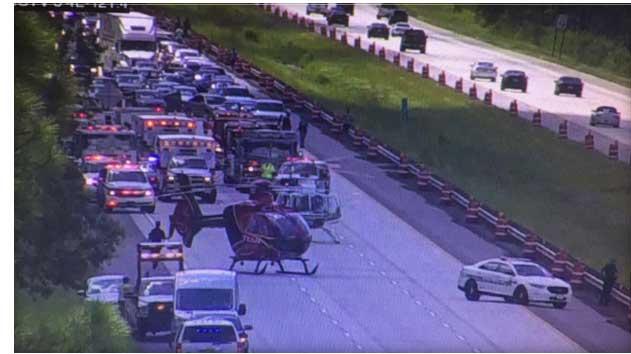 ORLANDO, Fla. (CBS NEWS)- A Missouri couple died and their two young daughters were seriously injured in a traffic crash Sunday near Orlando during a Disney World vacation, the Florida Highway Patrol said.

The Orlando Sentinel reports Greg and Sarah Moyers saved for months to take Hailey, 13 and Sophia, 8, to Disney World. The Leadwood, Missouri, family visited the theme parks and were headed to the beach Sunday before making the long drive home.

Troopers say a vehicle driven by Charles King, 43, of New London, North Carolina, drifted into their lane on Interstate 4, causing the Moyers’ vehicle to veer off the road and hit a tree. King wasn’t injured.

CBS Orlando affiliate WKMG reports the accident on I-4 in Deland happened around 12:30 p.m., and shut down the interstate for a time.

“Their kids were their world,” family friend Loni Burnside Eaton told the Sentinel. “They were very involved and supportive parents and just wanted the best for them. They wanted the girls to experience Disney and the beach. I can’t believe this really happened.”

Eaton said Sarah Moyers worked as a manager at McDonalds and her husband owned a muffler shop. They had lived in the small, eastern Missouri town for more than 20 years.

Troopers are investigating the crash, and WKMG reports charges are likely.