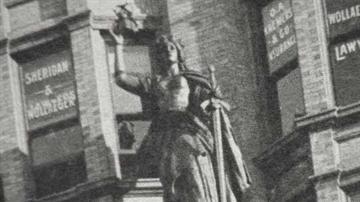 MILWAUKEE - A three ton work of art that was displayed in Downtown Milwaukee has not been seen since the 1940's and no one knows for sure what happened to it.

It's the solid bronze nine foot tall Statue of Germania. It sat above the entrance of the Germania Building on Wells Street beginning in 1896.

German immigrant turned publishing mogul George Brumder placed it there after he had the building built. The elaborate work of art cost Brumder 75-hundred dollars at the time.

The statue remained above the building's entrance until anti-German sentiment grew as World War I was heating up in 1918. By then, George Brumder had passed away and his eldest son William had taken over the business.

On the day the United States entered the war, the Statue of Germania was taken down and put into storage. It was last seen pictured in the basement of the Milwaukee Auditorium in 1942, but there's been no trace of it since.

There is speculation that it was melted down for scrap in the war effort, but that has not been confirmed. The mystery surrounding the Statue of Germania remains.