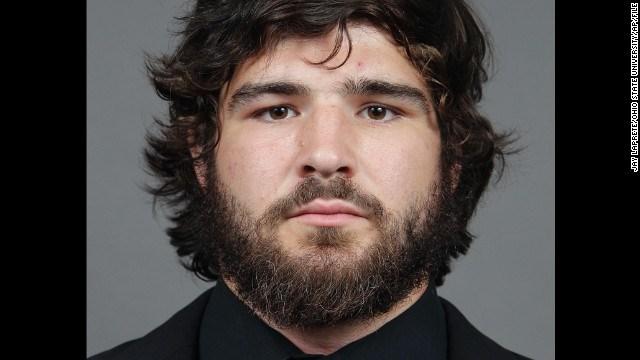 Kosta Karageorge, a fifth-year senior, had missed practice Wednesday and hadn't been seen since.

Sgt. Richard Weiner, with Columbus police, said that Karageorge died from what appears to be a self-inflicted gunshot wound.

His body was found inside a Dumpster and identified at the scene through tattoos, Weiner said.

A handgun was also recovered at the scene.

It was not immediately clear how long the body had been in the Dumpster, Weiner said. An investigation is ongoing.

\"The Ohio State University Department of Athletics was shocked and saddened to learn today of the death of student-athlete Kosta Karageorge, a senior from Columbus.

\"Our thoughts and prayers are with the Karageorge family, and those who knew him, during this most difficult time,\" the department said in a statement.

Last week, Karageorge's parents told police that their son had complained about concussion symptoms before he disappeared.

In a copy of the missing persons report obtained by CNN, Susan Karageorge told police she received a text from her son about 1:30 a.m. Wednesday that said, \"I am sorry if I am an embarrassment but these concussions have my head all f***ed up.\"

She added that her son has had several concussions and confusion \"spells.\"

Karageorge's sister, Sophia, told Cleveland.com that he was upset about something Tuesday night and that his roommates said he went for a walk.

His cell phone was last pinged about 2:30 a.m. Wednesday, the sister said.