'Miracle' Kitten Rescued from Garbage by Children in Racine 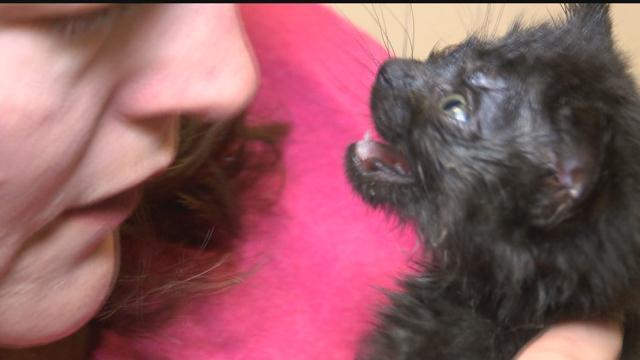 A 'miracle' kitten is recovering after someone put in the trash to die earlier this month.

A Racine family made the discovery on September 7. Now staff at the Wisconsin Human Society is telling Jacob Kittilstad that the mother and her children should be thanked for their work.

Maria Alvarez, who lives on Prospect Street, said she had gone to the store for only a few minutes. When she returned home she found a grocery bag on her steps.

It was labeled Piggly Wiggly. What was inside was something more disturbing.

Alvarez found a group of kittens, all near death, panting and damp in the heat.

She says she asked her husband and her childrens' friends if any of them had brought the kittens home. They all said no.

That's when she says her kids called the Racine Police.

All of the cats would die except for one. Angela Speed, Vice President of Communications for the Wisconsin Humane Society, says staff named it 'Miracle'.

"He's just about five weeks old. Miracle is definitely very underweight. He was covered in feces when he first arrived. He still is being treated for a respiratory infection and some eye issues," Speed said.

Miracle used to weigh less than a pound. Now's he's bulked up to 1.3 pounds.

Speed says she hopes the kitten's story will encourage others to prevent animal abuse. She also say she hopes people will consider donating to the Humane Society which has paid for Miracle's recovery.

"You know he's just a baby so he wants lots of affection. He wants to be held. But he's also very talkative," Speed said.

The investigation continues into who left the bag on the steps. Racine police have not said if they have any leads.

Click here to look at ways to adopt animals from the Wisconsin Humane Society or donate to their cause.