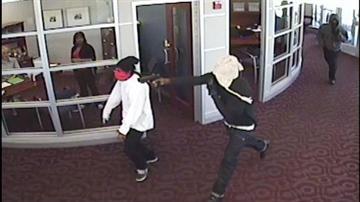 MILWAUKEE -- Bank robberies are increasing across Wisconsin, which is why the FBI office in Milwaukee is working with CBS58 finding the latest bandits still on the loose.

On Monday, a bank robbing crew of three was profiled.

Back in May of 2013, three armed men with their faces covered enter a Guaranty Bank in Brookfield.

They announce that this was a bank robbery and begin forcing people in the bank to the ground by threatening to shoot them.

No one is ever shot during the robbery.

According to the FBI, it appeared that the men knew what they had a plan going in to the heist.

Two of the robbers jump the counter and get into the cash drawers.

Agents said that with a crew of three, there's now three times the chance they will catch up with the suspects.