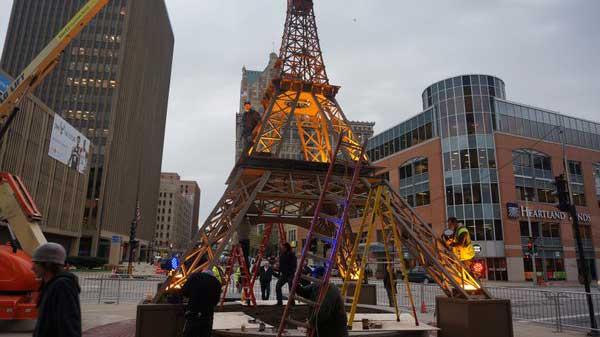 A beautiful cascade of color lit up a replica Eiffel Tower outside Milwaukee's city hall as folks gathered Monday night to pay tribute to the victims of the terrorist attacks in Paris.

The East Town Association took it's 40 foot replica of the Eiffel Tower out of storage.

It's the center piece of Bastille Days in the summer, but now stands  at the corner of Water and Wells in a show of solidarity.

The Milwaukee Theatre also lit in blue, white and red as is the MKE sign at the airport.

Mayor Tom Barrett spoke of peace and solidarity after the tower was lit up.

There were additional performances of songs made famous by French artist Edith Piaf.

The focus on the music of France in particular a reminder of the beauty and culture of the city of lights.

Milwaukee hoping to ease the pain of those in mourning and give them hope that justice will be possible for their lost loved ones.