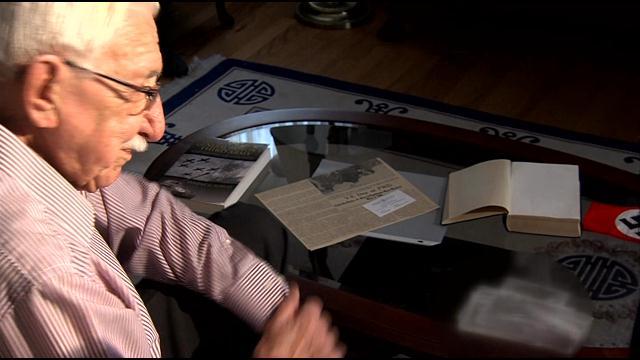 As the world marks the 70th Anniversary of the liberation of Auschwitz Concentration Camp in Poland, a World War II veteran remembered his experience witnessing the atrocities at another camp in Germany-- the first camp liberated by Americans.

Schulz has traveled to 100 countries, but there's one experience he will never forget.

\"It's amazing the things that are burned so deeply in your brain,\" said Schulz.

Schulz witnessed one of the darkest chapters of modern history as he toured Ohrdruf Concentration Camp.

Under Gen. Dwight D. Eisenhower's orders, Schulz was one of the first American soldiers to set foot in the camp, and when he arrived he began taking pictures.

\"I just put those films in a shoebox and I put them away in a closet, and there they sat for all these years until about 20 years ago,\" said Schulz.

\"At first when I talked about the concentration camp, I would be so overcome that, I couldn't speak,\" said Schulz.

With encouragement from his family, Schulz published a memoir, documenting his experience during WWII.

\"He said I want eyewitnesses, I want as many eyewitnesses as I can get, so he sent out an order,\" said Schulz.

Even 70-years later, it's still his duty to carry out orders from Gen. Eisenhower.

\"This is my eyewitness proof, that these concentration camps did exist,\" said Schulz.

Aside from his memoir, Schulz's pictures are featured at the National World War Two Museum in New Orleans, LA and the United States Holocaust Museum in Washington DC.