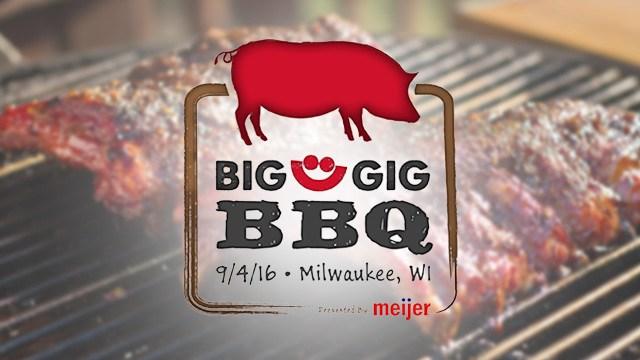 The entertainment lineup for the Big Gig BBQ, presented by Meijer, is complete!  Country star Chris Janson will headline the Briggs & Stratton Big Backyard with special guest Tucker Beathard, and Blues favorite Ronnie Baker Brooks will headline the South Pavilion.  The Big Gig BBQ will be held September 4, 2016 from 5:00 pm – 10:00 pm, rain or shine.   The Big Gig BBQ is also sponsored by Miller Lite and is an officially sanctioned event of the Milwaukee Rally.

Aside from the headliners, there will be plenty of entertainment and live music to keep patrons happy.  The South Pavilion will host two live cooking demonstrations by Biker Billy, best known for his popular syndicated public access TV show “Biker Billy Cooks with Fire,” and live blues music starting at 6:00 pm.  The full entertainment schedule is as follows:

Additionally, nationally recognized and self-proclaimed “Grillologists,” Mad Dog & Merrill, will be on site for a live taping of their “Midwest Grill’n” TV show from the grounds!  Mad Dog & Merrill travel the country performing in front of live audiences, writing cookbooks and making videos to show people how easy it is to be creative and entertain in their own backyard.

While supplies last, patrons can purchase a 2016 Big Gig BBQ Entertainment VIP Package which includes one Big Gig BBQ general admission, free parking, one admission to the south side of the Big Gig BBQ VIP Deck with a great view of the Briggs & Stratton Big Backyard stage, two complimentary drinks (beer or wine), light snacks and unlimited soda and water.

Now through May 27, tickets to the Big Gig BBQ are on sale for only $10 for general admission (normally $15) or $20 for the VIPig Pass (normally $30). The VIPig pass includes admission to the Big Gig BBQ, four (4) 2 oz. BBQ samples from any vendor, four (4) 3 oz. beer samples, free parking and a keepsake laminate and lanyard.  Parking will be available for $10 in Summerfest-owned lots. Complimentary motorcycle parking will be available on the grounds, capacity pending.  Children 10 and under are admitted free!