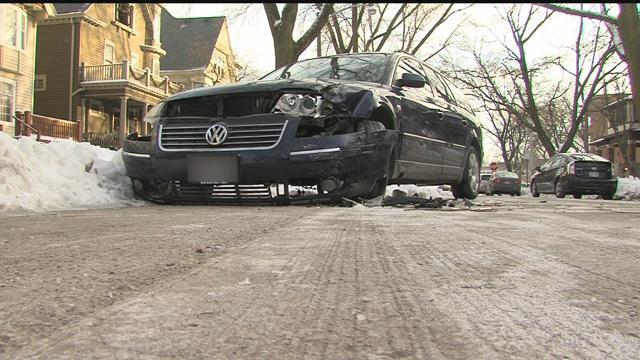 An Upper East Side woman says the driver of a car slammed in to hers and took off. The woman, Lisa Uvena, said she had gone out with a friend to ring in the New Year and when she left, her car was fine. That all changed when she got home this morning.

"It's frustrating because I had had a really lovely New Year's Eve and was walking back to my house and I spy this across the street," Uvena said, as she pointed out the extensive damage to the front of her Volkswagen. "Immediately you look for a note or something that somebody is saying this is my contact information. That's normally what happens."

The reason Uvena thinks it didn't in this case is because the driver took off.

"It was just designated a hit and run," Uvena said after learning a neighbor called police and an officer came out to investigate.

Uvena found a red bumper in the road right near her car. Not knowing about cars, she went on social media to get help figuring out where the bumper came from.

"Actually I posted a picture of that and, from there, the Facebook people, experts, figured out that it was not just a Chrysler but a Chrysler that made Jeep parts and that it was a Jeep," Uvena said.

She thinks it was a Red Jeep Liberty, between the years 2002 and 2004. Uvena's son, Max, found more broken parts while walking the dog this morning. A piece of rubber, and part of a headlight down the street.

Where the car went afterward is anyone's guess, but someone posted on social media seeing a Jeep with the same kind of description ditched on Lake Drive near Glendale Avenue in Whitefish Bay. We don't know if it's one that hit Lisa Uvena's Volkswagen. However, she says she is happy her neighbors called police and reported it for her. The neighbors helping neighbors kind of thing.

"Exactly. It's our duty to do that," she added.

We also tracked down a local towing company whose owner said a red Jeep, with some kind of front end damage, was towed from that area of Lake Drive Friday morning. Again, it's not known if it's the one that hit Uvena's car or not.