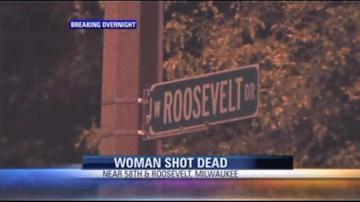 MILWAUKEE -- Police said a 50 year-old woman was shot and killed during an attempted robbery late Thursday night.  It happened near 58th and Roosevelt Drive, a neighborhood not use to violent crime

\"I noticed there was police tape blocking the whole entire block. It went from tree to tree to tree,” said Christopher Novonty. He lives just a few houses down from where the woman was killed.

Police said the victim parked her car at the home just before midnight and was shot and killed during a robbery attempt.

\"I think everybody was surprised and shocked at the same time,” said Joseph Njuguna. He grew up in the neighborhood where the crime took place.

He said he remembers it being very peaceful.

\"Everybody here watched me grow up. I use to be a paperboy when I was 12, as a neighborhood we are pretty tight-knit,“ said Joseph Njuguna.

Which is why he's not only shocked, but now very cautious.

“Obviously, our senses have been heightened by the situation, but I don't think it's a situation that I'm scared,\" said Joseph Njuguna.

Others worry the criminals will make their way back into the area.

“How do we know that they aren't going to come back? Is this neighborhood a target now because it is a quiet neighborhood,” asked Lazarica Ashley.

Police tell us they’re still investigating the case and no arrests have been made.