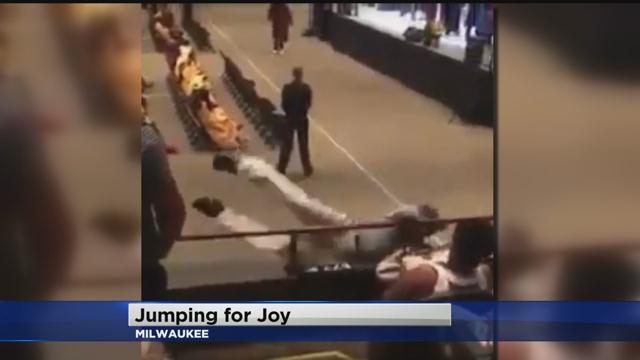 The video of an excited Uncle dancing and then vaulting over the railing at the recent graduation ceremony at Milwaukee's Vincent High School has gone viral.

At last count, it had been seen 10 million times.

Maybe that's because he also catapulted himself back over the railing to complete his dance before rejoining his family.

For those who know Anthony Melvin, his reaction wasn't surprising.

He's an energetic man who believes in the power of positive thinking.

For him, watching his nephew receive his diploma was a personal victory as well.

"It was the best moment of my life," Melvin told CBS 58 News. "For somebody that I had worked with personally. It was a struggle for both of us."

Melvin stepped in when his nephew's father couldn't.

He said being a role model meant admitting his own mistakes and brushes with the law.

His candor and enthusiasm inspired not only his nephew, but other young men in the neighborhood.

"Some people fall victim to the streets," said nephew Quashawn Barnes. "They don't make it through high school. I'm just glad I got the opportunity to do this."

Barnes will be attending college in Tennessee.

He hopes to open a group home one day to help young men like himself.