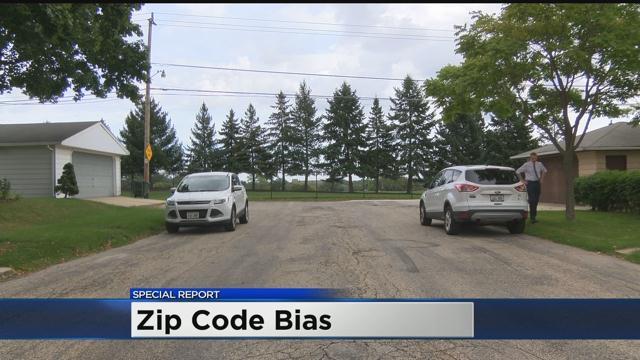 It's no secret your car insurance rate depends on the car you drive your driving history and even where you live.

Your specific address might play a bigger role than you think.

There is a place in Milwaukee where two neighbors could drive the same car, have the same job and live the same life-style. But one of them would pay 20% more for car insurance.

It's a scenario that's more common than you think, and it comes down to one thing:  zip codes.

Things like accident totals and crime statistics are grouped not by city, but by zip code.

At Brew City Insurance, Debbie Larson describes it as a numbers game.

"Insurance is a pool, and everybody puts their money into that pool, and the company spreads the risk between everybody. And if the risk is higher in that area, unfortunately, the costs are going to be higher,” said Larson.

We filled out dozens of mock quotes using the same age, car, and driving history on each one. On Milwaukee's Northside, we were quoted as high as $1300 a year.

In Waukesha, that same driver was quoted at about $850. That is a difference of more than 50 percent.

"If you take a certain zip code and unfortunately the driving habits of the people that live in that zip code aren't as good, there's more accidents, then the rates will be reflected,” said Larson.

That becomes interesting on zip-code boundaries like Meinecke Street in Wauwatosa.

Debbie Larson's best advice is to shop around.

"Here we represent over a dozen companies, and every company is very, very different,” said Larson.

Larson said while some companies might weigh heavily on your zip code others care more about your driving history and your car. She said it's not uncommon for one agency to cost twice as much as a competitor simply due to the formulas they use.

"Every single company has tons of employees that sit around, gather data, and then analyze is trying to figure out what their risk is for a potential client,” said Larson.

So unless you plan on moving your best bet for lower insurance is to stay safe behind the wheel.

Larson tells Evan, use an independent insurance agency to find the best deal.