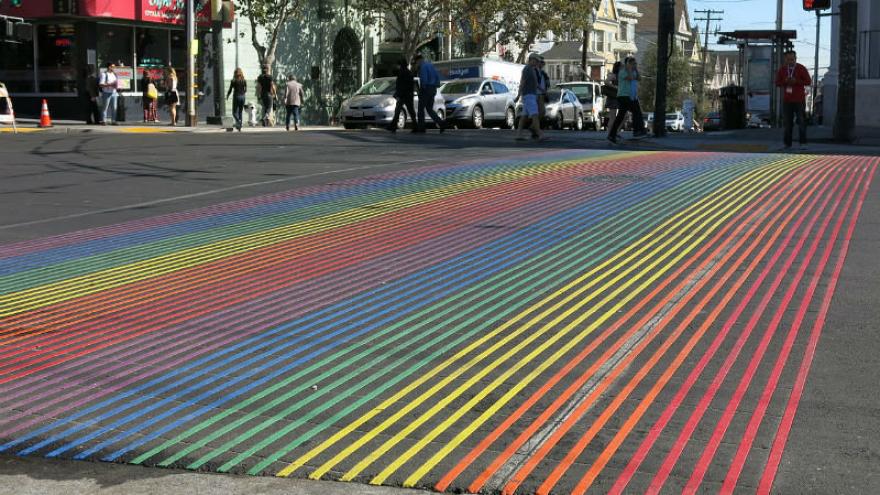 "We ask the City of Milwaukee to honor its incredible LGBTQ legacy with a decorative rainbow crosswalk at the intersection of Jefferson and Wells," reads the proposal. "This crosswalk, as the first Milwaukee monument to LGBTQ people, will be not just a symbol of local pride, but a testament to historic local triumph."

Since 2010, more than 30 cities worldwide have implemented rainbow crosswalks to commemorate their local LGBTQ heritage.

According to Milwaukee Pride, Inc., a local business owner submitted a similar proposal to Milwaukee DPW in 2016 that was rejected citing "cost, design and accessibility concerns, and stated that the project lacked historical or cultural significance."

Per the proposal, the rainbow crosswalks would be dedicated to the memory of June Brehm. In 1968, June Brehm opened This Is It at 419 E. Wells Street to create a safe, welcoming and inclusive space for her gay friends that was as good, if not better, than any other bar in town. Fifty years later, This Is It celebrates the historic claim of being the oldest LGBTQ bar in Milwaukee and Wisconsin, as well as one of the top 10 longest continuously operating in the United States. Although many LGBTQ businesses once operated near Cathedral Square, This is It is the one and only pre-Stonewall survivor.

Milwaukee DPW has released the following statement on the proposal:

"Mayor Tom Barrett’s office recently shared the attached letter with the Department of Public Works (DPW) concerning a request to install rainbow-colored crosswalks in the City of Milwaukee, specifically the Cathedral Square area.

DPW has fielded similar requests from community members in the past, including email conversations with Mr. George Schneider, owner of the This is It! Tavern on E. Wells St. in 2016.

In our research, we found that the Federal Highway Administration (FHWA) has specific rules concerning the colors allowed to be painted in crosswalks. Having shared that information with requestors, DPW staff also offered to work with community members on alternate sites and designs, including rainbow murals installed in an intersection or at mid-block (not crosswalks), and/or on sidewalks.

At no time did DPW staff “reject Mr. Schneider’s request, citing cost, design and accessibility concerns, stating that the project lacked historical or cultural significance”, as reported by a local media outlet.

DPW is aware of other cities that appear to have rainbow crosswalks as part of their infrastructure. We would be interested in knowing how these cities addressed the FHWA regulations to allow for these installations, considering the FHWA sent a letter to the City of Buffalo instructing leaders there to “cease and desist” their multi-colored crosswalk installations.

DPW stands ready to continue our collaborative work with community members, Mayor Barrett, and Common Council members to find a solution that works for everyone."