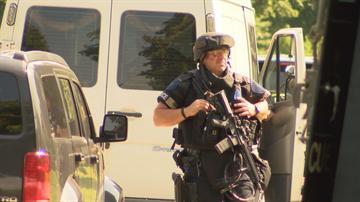 MILWAUKEE -- Officers came under fire Friday afternoon while serving a search warrant on the city's north side.

Around 1 p.m., a special drug enforcement unit and members of the Bureau of Alcohol, Tobacco and Firearms helped Milwaukee Police serve the warrant at a suspected drug house near 30th and Hampton.

\"Police announce themselves, they deploy a flash bang, that's for the purposes of startling the people inside and then they make a dynamic entry, which they did,\" Chief Ed Flynn said.

That's when someone inside the lower level fired at least one shot toward police.  Flynn says tactical units then moved inside.

\"It would appear the assailant discarded the weapon, rather than be possibly shot with it in his hand, which is a wise move,\" Flynn said.

Police arrested the shooter along with four others for keeping a drug house.  No one was injured and Flynn applauded the units' restraint for not firing back.

\"I don't think we normally expect people who are fired on not to fire back, but that's more the practice,\" Flynn said.  \"They are concerned about who else is in the house.\"

Some neighbors came out of their homes to see what was going on.  Many were startled by the scene, but not surprised it happened.

\"It's going on around here,\" Arthur Ray said from his home about a block away.  \"That's the best I can say.  It's always something.\"

Ray moved into the area with his elderly father nearly a decade ago.  He says most people keep to themselves, but they know illegal activity is going on.

\"I don't really know what goes on over there,\" Ray said of the house in question.  \"I see a lot of things happening in the alley with people, but I come and go.  I'm not going to ask them what they're doing.\"

Chief Flynn says the bust was part of a long and detailed investigation.  At the time of the press conference, officers had not finished their shooting investigation, which meant the search for drugs would need to wait several hours.

\"It's about the dealers who are using violence to protect their markets, violence to steal drugs and money and violence to intimidate their neighbors,\" Flynn said.

Milwaukee Police have not yet released the names of the suspects they arrested.