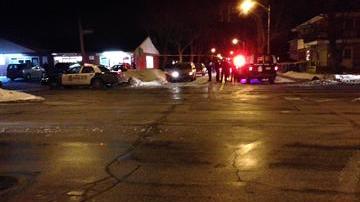 MILWAUKEE -- Milwaukee police have responded to a fatal officer involved shooting near the intersection of N. 58th St. and W. Custer Ave.

Police said that the incident happened around 5:40 p.m. Wednesday.

Officers had been scanning the area after two beer delivery men were robbed at gun point.

While doing that, police said that an officer came across a suspect that fit the description.

When the officer confronted that suspect things got physical in the backyard of a house.

Police said that he suspect reached for his gun and that's when the offer shot and killed the suspect.

Police said that they recovered the stolen money, a mask worn during the robbery and the gun, which we're told was previously reported stolen from another state.

Milwaukee police have not identified the suspect who was killed.