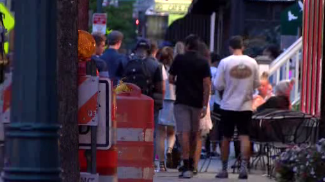 MILWAUKEE - Twenty armed robberies in almost the same area of Milwaukee have happened in just two months. The latest few happened just yesterday morning on the east side. An armed robber has been targeting unsuspecting people in the Brady Street and North Side areas.

Spots near the busy Brady Street, as well as residential areas of the east side, are the areas being targeted. Early yesterday morning between 1 a.m. and 4 a.m., people were approached by a suspect showing either a gun or knife. The suspect then stole the victim's belongings and ran off. Four such reports were made with police about these incidents.

Nobody is in custody for the four robberies.

Sixteen others happened on the east side between East Pleasant and East North Avenue between mid-June and late-August. Police say they did find people believed to be connected to those.