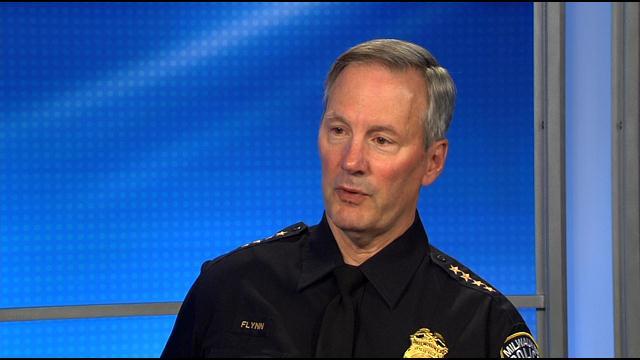 Milwaukee Police Chief Ed Flynn penned an editorial in Time about policing in America. It comes on the heels of the shooting death of an unarmed black man in South Carolina.

In the piece, Flynn says officers are \"depressed by the current environment today,\" noting many officers fear the scrutiny they'll face if they make a mistake.  The chief adds, \"Officers are fearful that every action is going to be judged with the worst possible presumptions.\"

But the editorial comes at a time when violence and crime in Milwaukee are up significantly over 2014.

Stolen car reports are up nearly 20 percent (1,550 to date) and homicides have nearly tripled (36 compared to 14 at the same time last year).

\"Crime and this level of disorder is like a cancer,\" south side alderman Bob Donovan said Friday afternoon.

Donovan says officers can only do so much, and in part, blames Chief Flynn for hindering their efforts.

\"I have officers telling me they're more fearful of their command officers than they are the bad guys on the street,\" Donovan said.

\"At the end of the day our officers need to know that they have both the support of the community and the chief that leads them,\" Milwaukee Police Association President Mike Crivello said.

Crivello says Flynn's decision to fire Christopher Manney after the Dontre Hamilton shooting drove a wedge through the force. But Flynn continues to stand by his decision.

Flynn goes on to say in his piece he fired Manney for violating MPD's training and adds people protesting against police need to turn the focus on their own communities and deal with \"systemic violence there.\"

I've been in policing for over 40 years. What we saw on the video of North Charleston police officer Michael Slager shooting unarmed Walter Scott eight times is the clearest example of documented wrongdoing I've ever seen. It's not even a close call.

It's one thing to identify with an officer needing to make split-second decisions under pressure in violent circumstances with insufficient information who reacts to a perceived or actual threat. That happens every day in America. Sometimes officers trying their best shoot and kill someone who is not the threat they perceived. It's analogous to soldiers overseas who are clearing a village. One person fires a round, then everybody fires a round, and we have a tragic circumstance. Those troopers aren't trying to be criminal, but nonetheless it's tragic.

I have been in circumstances where officers are trying to operate with the best of intentions but still engage in questionable uses of deadly force. People want to put them in jail over an error in judgment. It's not malice. It's not obvious recklessness or wantonness. But what we saw on this video is not that. I don't know a law enforcement professional who trains their officers to shoot unarmed, fleeing suspects. This is unambiguous. There's no gray area when it comes to that. Officers know you don't do that.

I started policing in the early 1970s. To say that policing is remotely like it was then is just wrong and foolish. There have been enormous improvements. One of the great ironies in American policing is that because of these highly controversial events that have been documented, there's a perception that the profession is somehow out of control or failing in its responsibilities to engage in fair and impartial policing. That is of great concern. We cannot be believed if we don't take decisive actions when our officers are clearly wrong. Bad police performance that's not motivated by malice needs to be dealt with very sternly, including termination. But not every police error is necessarily something that should result in jail.

I fired an officer for bad judgment that resulted in the death of Dontre Hamilton, who grabbed a Milwaukee officer's police baton and was shot 14 times by Officer Christopher Manney. The officer's approach was wrong and in violation of our training, and I fired him. That's an appropriate sanction to something that was unmotivated by malice. The challenge is: Are we doing enough of that? Prison isn't necessarily the appropriate sanction any more than it is for a surgeon who engages in a botched operation.

Every one of these well-documented instances sets us back. It doesn't matter where. Milwaukee, Chicago, New York, Los Angeles. They all get judged by what happens in Wherever, USA. All too often, stories drive policy, not data. But look at the data in every big city. There have been significant declines in the use of force. With all due respect to the motives of those who take to the streets, it's far easier to mobilize against perceived misconduct than to deal with systemic disparate violence in disadvantaged neighborhoods.

Our officers are depressed by the current environment today. They're judged by the worst example anywhere in the country. It affects their work. Officers are fearful that every action is going to be judged with the worst possible presumptions. I look at the case in South Carolina, and it's clear that this is a wrongful use of force. Generally speaking, cops in that environment are highly sensitive now to how they will be judged when they think they're trying to do the right thing.

The way you prevent something like this from happening again is training and supervision. I feel right now that we're at a critical point in terms of the public consensus about what the police are doing in the communities that need them the most. But there will be times when individuals go off the grid. There are no guarantees when it comes to human conduct. That's what we have to understand. Bad doctors are bad doctors even though they went to good medical schools. And sometimes bad cops are bad cops even if they've gone through training and passed the test.