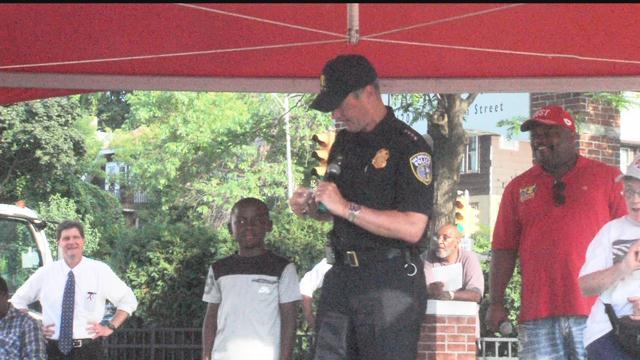 It's a place for kids to be kids on the city's near West side. Tuesday night, they could eat, paint and play alongside some of the city's finest.

"It's amazing to have us be unified, just not fighting, it's amazing," said Milwaukee resident Shannon Frazier.

"When you look out here and you see the babies, those are the most important that's walking around here," said Milwaukee Police Capt. Shunta Boston-Smith.

Capt. Boston-Smith, commander for district three, is passionate about the community she serves.

On the job only six months, she's walked neighborhoods and met many children who've left lasting impressions. One of them is 9-year-old homicide victim Za'layia Jenkins and her cousins.

"We were just jumping rope, I turned rope for them," she said. "That's what I remember the most about them, them being excited we stopped to talk to them."

Capt. Boston-Smith said the department is working hard to protect children from senseless violence and community events only send a message to those causing trouble.

"It allows the community to know when we come together we put the criminal on notice," said Capt. Boston-Smith. "Your criminal behavior is not going to be accepted."

But respect among police and the people is accepted, which Chief Ed Flynn reinforced with a young, future leader.

"Today we get to make Jaheem an honorary police officer," said Chief Flynn.

The first-ever National Night Out was held on August 7, 1984. Since then, millions nationwide have joined law enforcement in the effort to improve their communities.

There will be National Nights Out across Milwaukee County for the next few weeks. District four will be at St. Peter Immanuel Lutheran Church Wednesday on Acacia Street from 3-7 p.m.