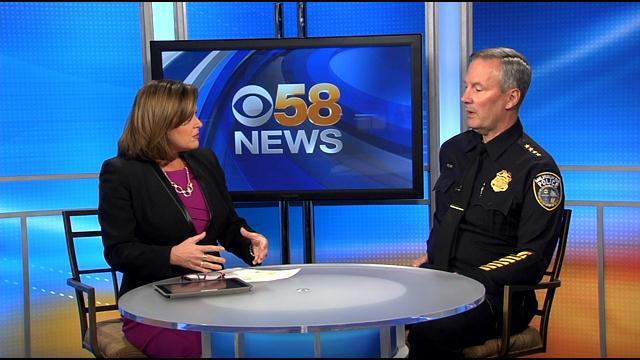 The aim of the CBS 58 News at 4 is to give those who shape our community the opportunity to be heard, unedited and in depth on issues impacting many people.

They discussed an array of topics, including his growing frustration with what he believes are inadequate gun laws to punish repeat offenders, the stymied investigation into the fatal shooting of 5 year old Laylah Petersen and that despite criticism of his handling of the officer involved shooting in Red Arrow Park, he has no intention of leaving his post.

The Chief also had just recently issued a statement regarding pursuit policies in the Milwaukee Police Department after some criticism was levied by Alderman and Mayoral Candidate Bob Donovan.

\"As a member of the Public Safety Committee, I would urge him to request a meeting to discuss this topic in detail rather than engage in his typical press release bombast. I also suggest he invite the families of individuals killed during police pursuits and solicit their opinions.\"

Here is the interview as seen live on CBS 58 Milwaukee.