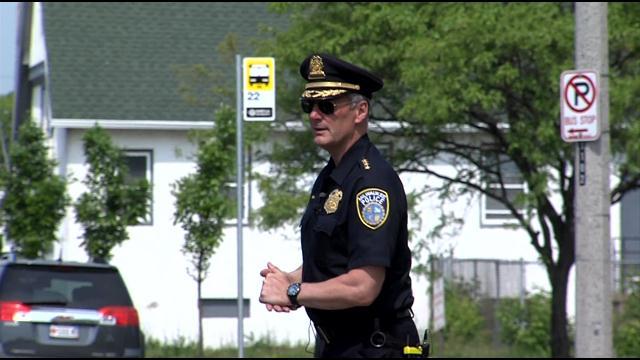 \"We were promised a public hearing,\" shouted Mary Watkins from the audience.

Pounding the gavel, board chair Sarah Morgan said, \"We'll ask for order in the room.\"

\"This is not a fair process,\" said Watkins.

Morgan replied, \"One more and I will ask you to be removed.\"

When Watkins refused to comply, Morgan asked for motion to recess.

After a short break, the board returned, unanimously approving Chief Flynn's re-appointment. The vote followed by a congratulations and cheers and applause from some in the room.

But not everyone joined in on the celebration.
Opposition centered around a lack of public input and how the department handled officer involved deaths, like Dontre Hamilton.

\"We're setting ourselves up for more controversy, more unnecessary death, injuries, expenses down the line,\" said Watkins during the public comment section of the meeting. \"This reflects poorly on all of us. We've got blood on our hands.\"

Chief Flynn said he's not blind to the violence in city streets. So far, there have been 74 homicides this year, more than double the amount this time last year, when there were 36. Non-fatal shootings are also up, 257 compared to 215 this time in 2014.

Finding a way to monitor public approval is priority for the Chief, but union leadership said Flynn's concern for officer safety is not.

\"That's all we're asking for is a fair chance to do our jobs, but our hands have been tied for a quite some time,\" said Mike Crivello, president of the Milwaukee Police Association.

\"My responsibility is to protect the public and make sure the department is equipped to do its job,\" Flynn said.

In support of the Chief, Mayor Tom Barrett released a statement, saying, \"Chief Flynn has proved himself a decisive and innovative leader who has been unafraid to make tough decisions.  He has led the Milwaukee Police Department to a position of national prominence.  We should remember that under his administration, some of the lowest homicide totals in the last three decades were achieved.  I have no doubt he is up to the current challenge.\"