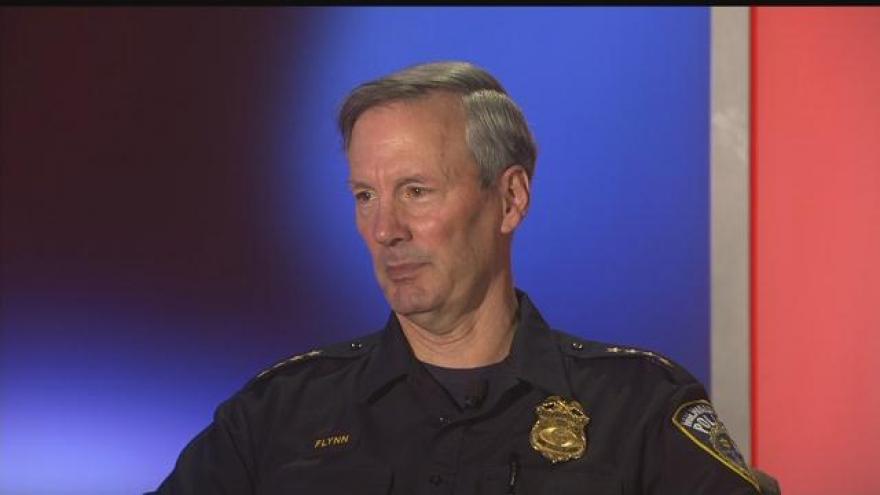 What happened in Sherman Park has raised a debate is there animosity between the community and police in Milwaukee.

Chief Ed Flynn said the police community relations are better than they're being portrayed.

He hasn't given up on Madison just yet helping Milwaukee curb the gun violence.

Michelle: What do you think it was that we saw in Sherman Park was it race related or was it people against police vs cop in nature?

Chief Flynn: None of the people in Sherman Park participated in that rioting. That was not a Sherman Park Riot. What happened was social media was used to rally people who were criminally involved to the scene of that officer involved shooting. And that crowd turned hostile almost immediately. Part of the problem is that we had to wait for investigators to show up to the scene so we couldn't clear the scene rapidly and that allowed those against law and order to rally to the scene and engage in law breaking.

Michelle: You've said in the past most recently in Chicago with other mayors facing similar crime issues that you are fighting an ideology and you seemed to give up on lawmakers doing anything to help Milwaukee.  And perhaps you'd like to go to federal govt. for help. When you engage in conversations like that how could be reach a solution without compromise of the state's cooperation?

Chief Flynn: I'm just trying to be pragmatic and report on my experiences so far. And the Police Chief’s are uniform in this belief because we have a slow mass murder going on. All of us are seeing increases in homicides and shootings and our disadvantaged neighborhoods that suffer the most and most of us are in states controlled by the gun lobby. I'm always hopeful even if pessimistic about the chance about the facts having an impact on people's decisions. And this year, we'll take another run at seeing that the career criminal statute is applied to the cc permit law. Because a career criminals are getting legally concealed carry permits. That's nutty.

Michelle: Among the main suggestions from the public safety committee which held several hearings from many branches of law enforcement are seasonal officers. My question is how do we get the best recruits if the job is only seasonal.

Chief Flynn: No major police department is going to use seasonal officers including this one, alright? This job is too important and too hard for part timers. This isn't the Jersey Shore where you hire gym teachers in the summertime to control the boardwalk.

Michelle: Number one on their list was improving police community relations. If you put the list together, what would be number one?

Chief Flynn: I think number one for us is making sure those who we arrest for gun crimes will experience a stiff sanction. They are not right now and it’s their behavior denigrating the lives and lifestyles of our urban residents. They live in fear because something's going to happen to their child because of gun play. No American should have to live like that. We've got to get the rest of the system function better to commit repeat offenders. Community relations in this city are far better than some would have you believe. The fire and police commission did a survey two years ago, that measured community approval and it was 80 % city wide and over two thirds of the African American community. And that survey was given around the time of the Ferguson incidents.

Michele: Given the situation you’re laying out for us are your officers lives in danger more than ever before and should we anticipate more officer involved shootings or should we turn to more de-escalation training assist in minimize the times an officer pulls out the weapon or is it the sheer number of people who have a gun who are dictating that the response that they're going to get when they encounter police is that that officer will have to draw his or her weapon as well?

Chief Flynn: The odds are that we are going to be facing more gun play because there is more gun play on the streets. We've had three fatal officer involved shootings this year. My officers go through fair and impartial police training, they go through de-escalation training, they go through crisis intervention training dealing with the mentally ill. But after they've gone through all of that training what do we do to lower the number of African American males killing each other.  The weekend of the disturbance surrounding the officer involved shooting we had 7 homicides not one of them made the front page nobody's funeral got covered by the mass media. There's a problem out there alright and its homicidal violence afflicting the young and holding entire neighborhoods hostage.