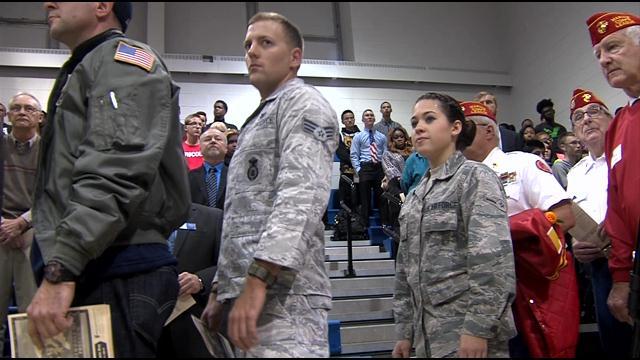 A stirring tribute to service men and women from all branches of the military at Wisconsin Lutheran High School Tuesday.

A procession of veterans from multiple conflicts, some in wheelchairs, some with canes, and others wearing t-shirts declaring they're a combat veteran, made for an impressive start to the ceremony that was filled with song and prayer.

Graduate Colonel Johnny Davis received a standing ovation. He now leads the \"old guard\" as it's known at the tomb of the unknown soldier at Arlington National Cemetery.

\"In the Army we like to say we're soldiers for life,\" Colonel Davis told the crowd. \"Veterans Day also allows Americans the opportunity to recognize the sacrifices and continued commitment of military family members. It's a true team effort.\"

There was much talk of bravery, sacrifice and simply love.

Milwaukee Mayor Tom Barrett said that for him the tribute to the Air Force really struck a chord because it reminded him of his father.

As the Mayor choked up and struggled to continue speaking, the crowd began clapping to show their support.

Students had put together photo projects on veterans. Their displays lined the hallways.

Veterans were given yellow roses to wear, some waved to the crowd, others stood at attention while some seemed to savor the hugs that came their way.

Heartfelt words of praise and gratitude from generation to generation.

He called on all citizens to consider what we have thanks to the actions of the men and women of the U.S. Military.

\"Live a little bit more on their call to freedom,\" Governor Walker said. \"As long as we continue to do that, that's the best tribute we can make not just on the 11th of November but on every day of this year.\"

As explained on the website of the Department of Veterans Affairs:

World War I – known at the time as “The Great War” - officially ended when the Treaty of Versailles was signed on June 28, 1919, in the Palace of Versailles outside the town of Versailles, France. However, fighting ceased seven months earlier when an armistice, or temporary cessation of hostilities, between the Allied nations and Germany went into effect on the eleventh hour of the eleventh day of the eleventh month. For that reason, November 11, 1918, is generally regarded as the end of “the war to end all wars.

In November 1919, President Wilson proclaimed November 11 as the first commemoration of Armistice Day with the following words: \"To us in America, the reflections of Armistice Day will be filled with solemn pride in the heroism of those who died in the country's service and with gratitude for the victory, both because of the thing from which it has freed us and because of the opportunity it has given America to show her sympathy with peace and justice in the councils of the nations…\"

The original concept for the celebration was for a day observed with parades and public meetings and a brief suspension of business beginning at 11:00 a.m.