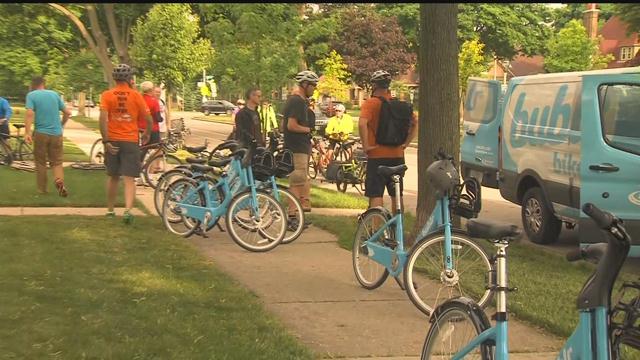 To kick off Wisconsin Bike Week, Milwaukee Mayor Tom Barrett along with several aldermen rode their bicycles to work this morning.

He is hoping they'll continue to help, as a city tries to become one of the most friendly bike cities in the entire country.

With hundreds of bicycles at nearly 40 stations throughout the city, Bubbler Bikes has been encouraging both residents and visitors to enjoy the area on two wheels.

"We are envisioning with bubbler original system"

It's something Milwaukee Mayor Tom Barrett is happy to hear.

He's been working hard over the past couple of years with City leaders to improve the Milwaukee’s ranking of a bronze award city from the American League of bicyclists to silver or gold.

Some of the challenges will include creating bike lanes on city streets, better connect the  city to  trails, dedicate space in neighborhoods specifically for bicyclist such as greenways.