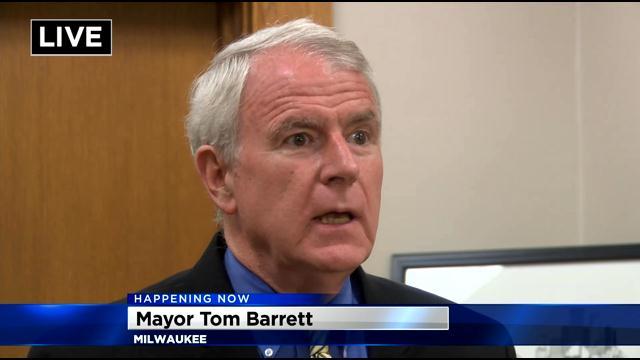 Responding to the highest homicide rate in the first quarter of the year since 2000, Milwaukee Mayor Tom Barrett announced that the U.S. Attorney James Santelle is committing the assignment of ATF agents at the street level to address gun crime in Milwaukee.

\"This level of violence is totally unacceptable at any time,\" said the Mayor on Wednesday during a press conference broadcast live on the CBS 58 News at 4 p.m. \"But it's a level of violence we have not seen in the City of Milwaukee in the first quarter of the year since 2000.\"

Milwaukee has seen a huge spike in car thefts this year with several instances of suspects speeding away and crashing into innocent people, sometimes with fatal results.

\"Our concern about individuals in car thefts and carjackings is that they are dealt with very, very severely,\" explained Mayor Barrett.

\"I was heartened by the response,\" the Mayor said of his meeting and discussions with both men and their departments.

The mayor also called for an immediate change in Wisconsin's conceal carry law that would make the offense for having a gun without a permit a felony instead of a misdemeanor.

Shortly after the press conference Rep. Jim Steinke sent out a tweet that said:

In an op-ed piece for the Milwaukee Journal Sentinel Assembly Speak Robin Vos wrote that \"We all want the city of Milwaukee to thrive and prosper. The area is an economic driver for the state.\"

But he wrote that he thought the Mayor and Police Chief Ed Flynn were passing the buck.

\"It's easy to place blame on others and come to the state with your hat in hand,\" wrote Voss. \"What's hard is to take a close look at what's really happening in Milwaukee and its police force.\"

Voss echoed problems cited the day before by Milwaukee Police Association President Michael Crivello who released a statement that said in part:

\"Our police officers are over tasked; while expected to perform duties of vacant positions – these officers are forced to work without partners, which puts them at great risk, delays response time and ultimately jeopardizes the safety of the entire community… investigations are minimized [detective & forensic investigators: each downsized - 25% less than when Flynn arrived] - - the crook(s) has/have gained the upper hand under this current leadership!\"

Nik Clark of Wisconsin Carry objects to the mayor's focus on conceal carry.

\"Every time Tom Barrett wants to have a press conference and he blames the legislature, he blames conceal carry laws,\" Clark told CBS 58 News.

Instead Clark points to lenient sentencing by judges as a critical factor.

\"These crimes that are gateway crimes to bigger and better or more serious crimes, People aren't getting punished for those, so they're really getting pass after pass after pass until they feel emboldened to do something serious like use a gun to harm somebody.\"

Mayor Barrett said that Chief Judge Jeffrey Kremers was part of his community justice meeting that monitoring of gun court was among the issues discussed as part of a wide spread effort to curb the gun related crime.