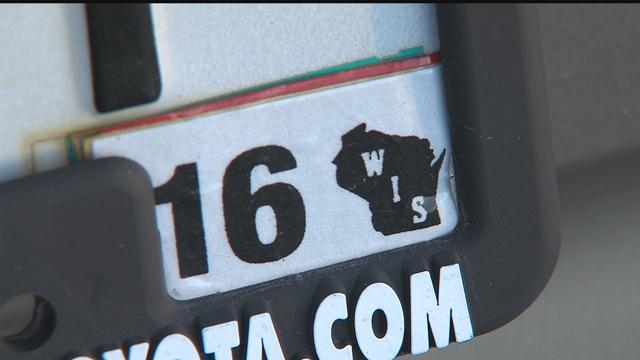 People's identities are being stolen, and their cars are the target. The thieves are going after license plates and registration stickers. Milwaukee Police say it's a crime that is somewhat common. The thieves will take some, or the plate and put it on their car. An east side man said that happened to him this week.

Elliott Baas started his Wednesday morning routine like normal, but that changed when he got outside.

"I saw my license plate had been cut to get the sticker off the back," Baas said.

He thinks it happened Tuesday night while his car was parked on North Prospect Avenue. Baas still has the plate on the front of his car.

He calls it annoying and inconvenient.

"Kinda have to leave my car in the driveway for a few days while it gets corrected," Baas added.

Shaun Peterson, with the Division of Motor Vehicles suggests going online and finding the form to get a replacement sticker or plate. You can mail it in or go to a DMV customer service center with proof of registration.

"Just show them that you have that valid registration and that your sticker was stolen or had been misplaced and they will get you a new one for no charge," Peterson said.

However, the DMV does charge $5 to do it in person. If your entire plate is stolen, you'll be issued new plates all together and costs $2 each for the standard plates and as much as $6 each if you have specialty plates. Once Elliott's situation is fixed, he's going to put a frame around his plate.

"Yeah, I think so, I think that's a good idea, just to avoid this in the future," Baas said.

He thinks his plate was targeted because it was easier to get to since it didn't have a frame around it. The DMV also suggests reporting the theft it to police, and a Milwaukee Police official agrees. If your plates or registration sticker is stolen, and you do get pulled over, you most likely would not get a ticket if your registration is valid and you can explain what happened.