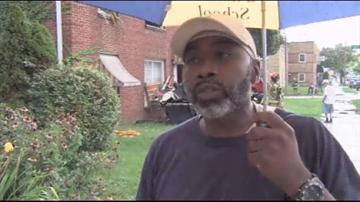 Shawn Armstrong says he noticed flames coming out of a building on 61st and Lisbon.

\"I saw fire coming out of one apartment,\" Armstrong told CBS 58 News. \"I  figured if there's people in the other three apartments, I might have a chance to get there.\"

He got someone to call 911 while he ran to the apartments, knocked on doors and found one man who had no idea the place was on fire.

\"He was totally oblivious to what's going on. He even looked like he was just waking up.  I told him he had to get out, the place is on fire.\"

Fire officials say everyone got out of  the building safely.

Seven people will need new places to live and the Red Cross is assisting them.

Investigators say the first started on the second floor but don't know the exact cause.