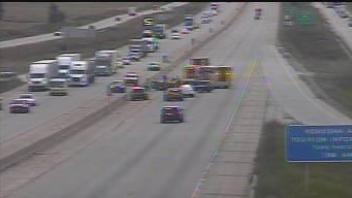 On Wednesday, September 14 at 10:50 AM a Racine County Sheriff’s Deputy stopped a vehicle on I-94 and when the deputy exited his squad, the vehicle sped away from the traffic stop at a high rate of speed.

The deputy pursued for a short distance but terminated the pursuit because of very high speed and traffic conditions. The vehicle later crashed on the southbound on ramp to I-94 from County Highway KR. According to authorities, the vehicle exited I-94 at the Highway KR off ramp, failed to stop at the stop sign at the end of the off ramp and tried to reenter southbound I-94 at the Highway KR on ramp but lost control and crashed the vehicle.

The driver and only occupant of the vehicle was identified as Terrence Andersen a 28-year-old Milwaukee man. Andersen sustained non-life threatening injuries and was taken to a local hospital by ambulance.

Andersen is being arrested on a felony warrant from the Wisconsin Department of Corrections and for a charge of “Fleeing and Eluding a Police Officer” along with several traffic violations.