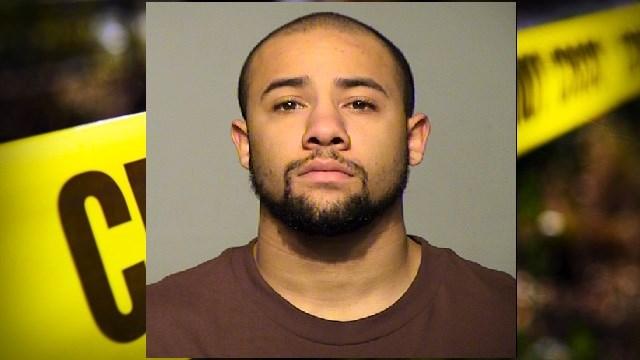 Justin Sykes of Milwaukee has been charged with first degree reckless homicide in the death of Kayla Bauske on Monday, October 24.

On Monday police were dispatched to Steny's Bar and Grill on South 2nd Street when a caller claiming to be Sykes' mother said that a friend of Justin's told her that Sykes hired a prostitute who had stolen from him and then strangled her. Justin Sykes was allegedly on cocaine and drinking when the incident occurred.

When police arrived at Steny's they located Sykes who admitted to hiring a female escort but told police she left his house. When police exited and then reentered the bar they could not locate Sykes causing them to believe that he fled.

Police searched Justin Sykes home located at 1822 North Arlington Place where an officer entered his bedroom and observed a storage bin in the closet with clothes on it. When the officer kicked the bin it seemed unusually heavy so he moved a white towel and felt something cold and rubbery. When the officer inspected the contents of the bin he discovered a dead and naked young woman later identified as Kayla Bauske.

Examination by the Assistant Medical Examiner determined that the victim died from strangulation and also had blunt force trauma to the head, torso and extremities. The ME also noticed post-mortem chemical burns all over the victims body.

When police interviewed Sykes about the incident he said that it was not his intention to hurt her but after having sex he noticed that $300 was missing from his wallet and the victim was attempting to leave the apartment. Sykes confronted Kayla Bauske in the kitchen about the missing money and they began to fight when the victim kneed him in the groin and scratched at his face. In an effort to get the victim to be quiet Sykes tried to get her to pass out by strangling her but instead ended up killing her.

Sykes told police he tried to wash her off with toilet bowl cleaner to try and hide any DNA evidence and broke her legs so she would fit in the storage tub.