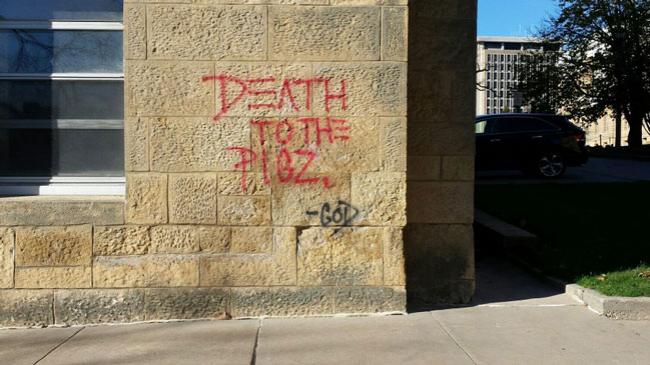 A 21-year-old Milwaukee man was arrested for his connection to at least 11 instances of graffiti on UW-Madison campus.

According to UW-Madison Police, the investigation into the incident spanned six months.

Denzel J. McDonald, 21, a UW-Madison student, was arrested on 11 criminal counts for graffiti and one count of disorderly conduct for threatening a bystander.

After a lengthy investigation and collection of evidence, UWPD concluded that McDonald was responsible for the rash of graffiti on campus structures and buildings signed by “God.”

In one instance, a bystander tried to intervene and stop him from defacing the property.

McDonald said to the bystander that he would kill them if they called police.

The total cost to clean/repair the graffiti damage in all 11 cases was in excess of $4,000.

UWPD police officers had been attempting to contact McDonald for the last two weeks for questioning on doors and phone calls went unanswered.

Overnight, two more instances of the same form of graffiti occurred on campus.

As a result, officers located McDonald in a classroom on Thursday morning. He was asked to step in the hallway, which he did.

After more conversation, McDonald was then placed under arrest outside the building without incident. One of the officers involved was wearing a body camera.

McDonald was booked into the Dane County Jail.