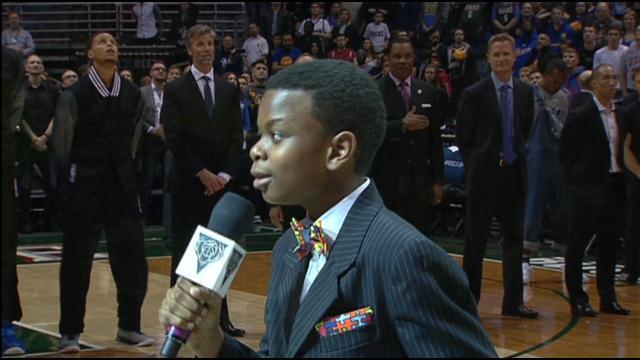 His name is Jahbarri Bradshaw, and the 12-year-old kid is ready to perform at the BMO Harris Bradley Center.

CBS 58 spoke with Bradshaw Monday evening, and he gave a sneak peak for what fans can expect Thursday night at the Bucks game.

\"Every time I sing, I'm just super excited”, said Jahbarri Bradshaw. “I'm like how did I get here?\"

Jahbarri Bradshaw is no stranger to the lights and cameras.

He also performed at the Bucks game on March 28th.

\"I auditioned for the national anthem, and they just invited me over and over, and over again”, said Jahbarri Bradshaw. “And I'm like this is awesome.\"

“No one knows it”, said Sonya Bradshaw.

Sonya Bradshaw says her son started singing at the age of three.

\"He would always make these noises, and I would say that don't look normal”, said Sonya Bradshaw.

But Sonya would soon realize her son's talent.

\"We would play different songs, and he would just start singing, and we realized he was singing before he could even talk”, said Sonya Bradshaw.

\"I was super surprised”, said Jahbarri Bradshaw. “First time she told me, I was like, what?\"

Jahbarri has been watching the bucks closely this season, and he says they have a tough match-up with the Bulls.

\"I think they've been doing well, and they got to try even harder to get that trophy”, said Jahbarri Bradshaw.

Sonya Bradshaw says the song can be found on Amazon or iTunes.

Jahbarri says he is a fan of gospel, and he's looking to pursue a career in music.

The Bucks and Bulls will play at the BMO Harris Center Thursday night for game 3 of the NBA playoffs.