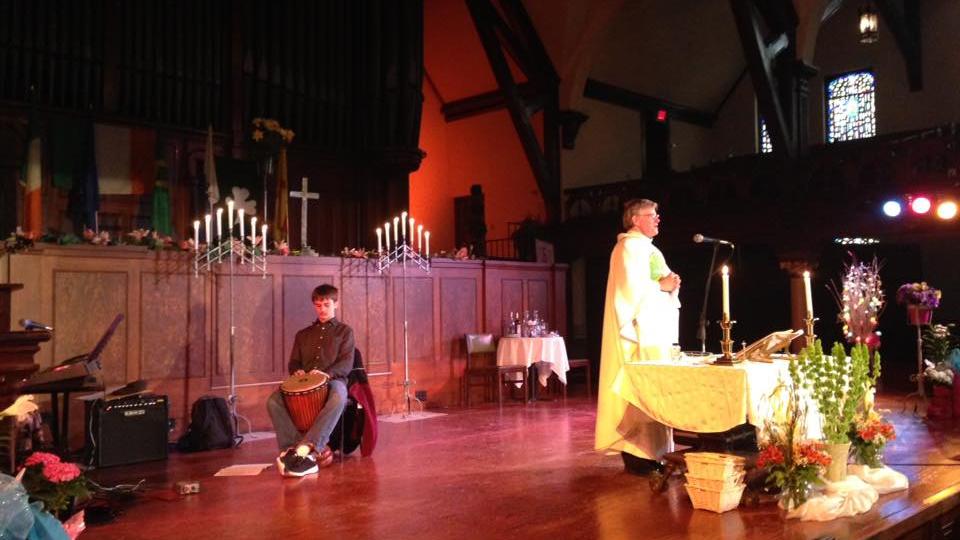 On Easter Sunday, communities throughout the world gathered to commemorate the day 100 years ago when a comparatively small group of individuals stages an armed rebellion against English rule in Ireland.

They called it the Easter Rising. There were many casualties, dozens of them civilians.

It was a controversial event where a provisional government declared Ireland a Republic and independent state.

While Milwaukee always puts on a great party for St. Patrick's Day, various organizations took this opportunity to rid the public perception of Irish stereotypes and attempt to present some real history and give true understanding to the Irish experience.

Hundreds gathered early for Mass at the Irish Cultural and Heritage Center.

There was a recreation of the reading of the proclamation by Derek Byrne. It was the document declaring the Irish Republic at the steps of the building at 20th and Wisconsin.

The Shamrock Club bagpipers brought the procession inside where the faithful were delighted to hear celebrant Father Terry Brennan take a prayer and put it to the melody of the song "Danny Boy."

Back home in Northern Ireland, where it is shared government but still part of the United Kingdom, the reception to his music is not as warm.

"It really feels like I have family here," Danno told CBS 58's Michele McCormack. "I've been coming here for years."

McCormack then read the proclamation before the enthusiastic crowd that had gathered to better understand the painful armed struggle Ireland has endured to the enjoy the freedoms it has today.

Danno says there is still much to be done in the six northern counties and sees the Easter event as a commemoration, not a celebration.

It is with that in mind that the first part of the event took a solemn tone.

Participants where then invited to have a pint and share some happy moments of their recollections of visits to Ireland.

1916 commemorations are going on throughout Ireland, of course in the heart of Dublin where it all began, and across the world in Irish communities that seek to bring a better understanding of their culture and history to a world that seems so enthralled with Irish charm and wit.

The proclamation is as follows:

IRISHMEN AND IRISHWOMEN: In the name of God and of the dead generations from which she receives her old tradition of nationhood, Ireland, through us, summons her children to her flag and strikes for her freedom.

Having organized and trained her manhood through her secret revolutionary organization, the Irish Republican Brotherhood, and through her open military organizations, the Irish Volunteers and the Irish Citizen Army, having patiently perfected her discipline, having resolutely waited for the right moment to reveal itself, she now seizes that moment, and supported by her exiled children in America and by gallant allies in Europe, but relying in the first on her own strength, she strikes in full confidence of victory.

We declare the right of the people of Ireland to the ownership of Ireland and to the unfettered control of Irish destinies, to be sovereign and indefeasible. The long usurpation of that right by a foreign people and government has not extinguished the right, nor can it ever be extinguished except by the destruction of the Irish people. In every generation the Irish people have asserted their right to national freedom and sovereignty; six times during the past three hundred years they have asserted it in arms. Standing on that fundamental right and again asserting it in arms in the face of the world, we hereby proclaim the Irish Republic as a Sovereign Independent State, and we pledge our lives and the lives of our comrades in arms to the cause of its freedom, of its welfare, and of its exaltation among the nations.

The Irish Republic is entitled to, and hereby claims, the allegiance of every Irishman and Irishwoman. The Republic guarantees religious and civil liberty, equal rights and equal opportunities to all its citizens, and declares its resolve to pursue the happiness and prosperity of the whole nation and of all its parts, cherishing all of the children of the nation equally, and oblivious of the differences carefully fostered by an alien Government, which have divided a minority from the majority in the past.

Until our arms have brought the opportune moment for the establishment of a permanent National Government, representative of the whole people of Ireland and elected by the suffrages of all her men and women, the Provisional Government, hereby constituted, will administer the civil and military affairs of the Republic in trust for the people.

We place the cause of the Irish Republic under the protection of the Most High God, Whose blessing we invoke upon our arms, and we pray that no one who serves that cause will dishonour it by cowardice, inhumanity, or rapine. In this supreme hour the Irish nation must, by its valour and discipline, and by the readiness of its children to sacrifice themselves for the common good, prove itself worthy of the august destiny to which it is called.

Signed on behalf of the Provisional Government: